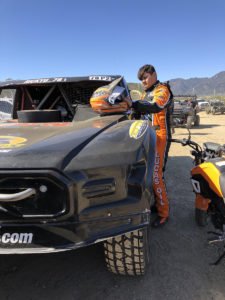 Making his Lucas Oil Off Road Racing Series Pro 2 debut this past weekend, Ricky Gutierrez and his Ricky G Racing Team traveled to Glen Helen Raceway in San Bernardino, California for the opening round of the 2019 season. Competing in the Lucas Oil Off Road Pro 2 division, Ricky was the youngest driver ever to compete in the class. He finished in the top-ten, despite having to pit for a flat tire, which he sustained at the start of the race and moved him to 13th position.

With practice delayed on Friday due to high winds, the amount of normal track time was reduced. Looking to put all of his hours practicing, studying the track and pushing his truck, tires, and team to the limit, Ricky G was ready to show his skills on the racetrack and was excited to have a successful debut weekend under his belt.

When the track did open for practice and qualifying, the Pro 2 rookie took each passing corner of each lap to quicken his times. Setting the stage for the main event on Saturday evening, Ricky G was poised for his first start of the racing season.

“I had a rough start which hurt my end result. After turn one, I made contact in the air with another truck giving me a flat tire, so I had to pull into the hot pit,” explained Ricky G. “My crew had a fast tire change and got me back on track only two laps down. I could have just put my head down and quit, but I pushed even harder and kept in the mix with several great land rush restarts due to great grip on my Mickey Thompson Tires! I had some intense on-track battles and ended up passing more than half of the field. I’ll be pushing hard at the next event for a top-five finish.”

Ricky G finished in the fourth position when the race ended but was scored an eighth place finish due to his flat tire. Ricky’s lap times were right there with the top-five finishers. Even though he was two laps behind the eventual race winner due to the pit stop early in the race, Ricky G battled with his fellow competitors gaining more and more experience with each pass. Ready for the next event, a goal has been reestablished.

Ricky continued, “The next race is in Arizona, and I can’t wait to get started. I am determined to push for a top-five result.”

In just over three weeks, Ricky G Racing will travel to Chandler, Arizona for the second event in the Lucas Oil Off Road Racing Series at the Wild Horse Pass Raceway.

Ricky G would like to thank his partners for their continued support. A huge shout out to Ricky G Racing, G Brothers, as well as the Lucas Oil Off Road Racing Series for an outstanding event.