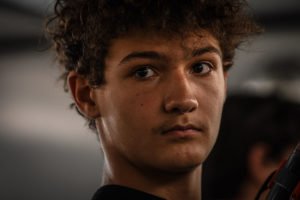 Now that the Indianapolis leg of the Cooper Tires USF2000 Championship is complete, without a doubt, the most consistent driver to come out of the Indianapolis Grand Prix road course and Lucas Oil Raceway oval event combination is the debutant 14-year-old rookie, Jak Crawford. As the youngest driver in the series, Jak finished fourth in both bookend events with three different podium finishers in front of him all while showing the driving patience to make it to the podium.

“I have competed in two events now and in both events the best car won,” explained the DEForce Racing driver. “So we will just keep working on our race pace and hope to make it to the podium soon. Our team is good enough to hit on something to put us up front. We will also hope for a little luck with yellow flags which haven’t gone our way in my first two events.”

For the oval testing event on May 13th, Jak’s car was more suited to him. The RE/MAX #52 entry could pass in any lane with good speed. The change from then to race day only eleven days later may have been the weather, which saw a 30+/- degree swing in temperature. Though Jak’s car had speed, the abbreviated weekend saw a car that was simply not handling as well as it was at the test. Qualifying seventh for the race, Jak believes with new tires he was as fast as almost anyone but the pole position winner and admitted to making a small mistake on his first qualifying lap.

“My out lap for qualifying was faster than anyone, then I ran in a little too deep in turn one on my green flag lap and the tires didn’t hold the car, so I lost two tenths,” added Crawford. “I had a good second lap, but it wasn’t enough to overcome the loss of time in lap one. I had a front row car for qualifying but I don’t think I would have had the pace to hold off the #73 or the #14 cars and win the race. You never know until you get out front and see if the other drivers can pass.”

Lap cars were a problem in the race. On the first restart, lap cars starting just in front of Jak hindered the pace of several of the frontrunners. Furthermore, several of the lapped cars choose not to obey the blue flags shown, so getting through lapped traffic proved to be a problem for several drivers. 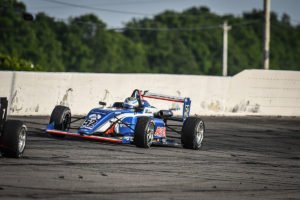 “For two races in a row, yellow flags have not gone our way and potentially cost us two podiums,” continued Jak. “But that is a part of racing and all I can do is just take what unfolds on track.”

The endurance of a 75 lap race stressed the bounds of the young driver’s body.

“I was excited for the first yellow flag until my spotter told me we still had 35 laps to go, and I couldn’t believe there were that many laps remaining. I guess muscle memory kicked in for the last part of the race because my arms and my throttle leg had turned to rubber. I have never had that happen before in any race ever but I have never run a 75 lap oval race before in a car like this.”

With eight laps to go there was a final restart. Jak had a lunge forward and challenged the third position on the inside for a couple of laps, but the car just wouldn’t stick to the bottom of the track like it had the day of the testing. A few laps later, a little driver mistake in the turn three/four complex with five laps to go finally removed the podium opportunity as Jak was closing on the third place car at the end of the race.

Oval racing certainly shook up the order of the podium finishers in the Cooper Tires USF2000 Championship, but the constant in it all was the performance of the new 14-year-old rookie pilot, Jak Crawford. Now the series moves back to its road course format for the remainder of the series.

“I don’t really know what to expect out of the Road America race since I have never been there and we only have two short practices. I know it is the home track of the second best team in the series. Last year they started the race 1-2-3. DEForce Racing is doing a good job against these old established teams with years of setup notes. I don’t know what to expect.”

Jak Crawford would like to thank marketing partners: RE/MAX and AmCap Home Loans as well OMP, Bell Helmets, Palmetto MDR and Speedsportz Racing Park. Big shout out to DEForce Racing for all the hard work in car preparation and maintenance as well as their trackside support program.