WINS AND HEARTACHE FOR COPELAND MOTORSPORTS AT ROAD AMERICA 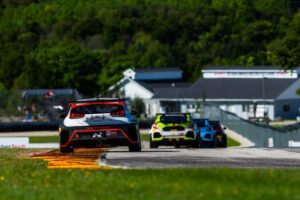 It was a weekend of highs and lows for Copeland Motorsports this past weekend at Road America. Taking on the 4.048-mile course in Wisconsin, both Tyler Maxson and Tyler Gonzalez were leading their respective championships in both TCR and TCA and were confident heading into the second half of the 2020 TC America Championship. Maxson was coming in with a streak of eight straight wins while Gonzalez had accumulated four wins and six straight podiums. With spirits high, Copeland Motorsports headed into the triple header weekend to compete in rounds nine, ten and eleven of the 2020 season.

With weather conditions improving before race one, Copeland Motorsports quickly made the switch for a dry setup shortly before the green flag. After completing just one lap, Tyler Gonzalez was forced into the pits with mechanical issues. Maxson fell to third quickly but with 30 minutes remaining, reclaimed his lead and claimed his ninth straight TCR win of the season, remaining undefeated in 2020.

Saturday was a day to forget for the Copeland Motorsports crew with both Maxson and Gonzalez being forced to retire with mechanical issues after only a handful of laps each. Maxson suffered a broken shock that ended his undefeated season while Gonzalez suffered an engine issue which caused him to lose power and slow in the early stages.

On Sunday, the team was determined to finish the weekend on a high note and finish back on the podium. Tyler Maxson was able to work his way up from sixth but finished just shy of the podium in the fourth position. Tyler Gonzalez, after starting from the back of the field, was able to take advantage of a restart after the race was red flagged early and begin his push to the front. On lap six, Gonzalez took over the point, pulled away from the field and claimed his fifth victory of the TCA season in his Hyundai Veloster Turbo.

While it was not the weekend the team was hoping for, Maxson was able to add another victory to his resumé and hang on to his championship lead. Tyler Gonzalez also claimed an additional win, but unfortunately after two forced retirements, he fell back in the championship point standings and will need a strong showing at the next event.

After retirements and wins, Copeland Motorsports is eager to head into rounds twelve, thirteen and fourteen in just a couple of weeks at Circuit of the Americas in Austin, Texas. With six rounds remining in 2020 over the course of two event weekends, Copeland Motorsports is able to add an additional driver to their lineup in both TCR and TCA for the remainder of the season.