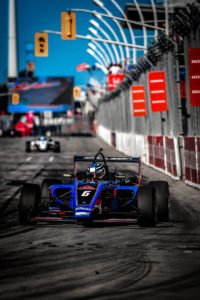 It was a winning weekend north of the border for Jay Howard’s Driver Development program as Christian Rasmussen provided the team with their first career Cooper Tires USF2000 Championship series victory. Taking on the tight confines of the Streets of Toronto, Rasmussen was able to master the barrier lined circuit on Sunday, leading every race lap and earning his first trip to the top step of the podium.

“It was an amazing race weekend for the entire team; I’m super proud of the boys,” explained Jay Howard. “Both Christians drove extremely well. Congratulations to Rasmussen on his first USF2000 victory; it was well deserved and a very dominant performance. I am very happy for him and the entire team.”

After qualifying on the pole position and leading Saturday’s wheel-to-wheel action, a minor mistake by Rasmussen cost him the point and eventually the race win. Recovering to cross the stripe in the second position, the young talent returned Sunday with a vengeance. With the second USF2000 event of the weekend on Sunday morning prior to the start of the NTT IndyCar Series race, Rasmussen put on a show. Taking the lead on the opening lap and never looking back, the JHDD pilot led every lap on his way to victory.

Christian Bogle qualified a season high in the tenth position and immediately followed with his best race of his career. Advancing forward to the fourth position in the opening laps, Bogle settled into running consistently in the top-ten and was en route to score his first top-ten of the season. Running seventh and pushing hard to put pressure on the sixth place driver, minor contact with the wall on the final circuit caused damage and forced him to retire for the race. Prior to retiring the car, Bogle had the fourth fastest lap of the race.

Howard continued, “Bogle really impressed me. He started racing about a year ago, had no karting background, was completely green. With his experience level, it is extremely difficult to compete at this level with the quality of drivers in the series. It’s a testament to his dedication and hard work he is putting in both at and away from the track. I’m very proud of his achievements.”

With Toronto now in the rear view mirror, it is off to the Mid-Ohio Sports Car Course this weekend for rounds ten and eleven of the Cooper Tires USF2000 Championship. With both drivers returning to a track that they have competed at before, Rasmussen was a pole position and race winner at the facility in 2018 as he and the team look to carry on the momentum towards the end of the 2019 season.

For more information on Jay Howard’s Driver Development program, please contact him via e-mail to Jay@JayHoward.com or visit him online at www.JayHoward.com.

Photos by: Road to Indy