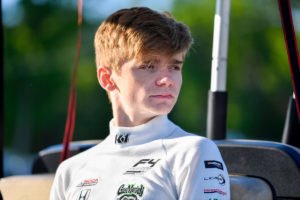 Looking to finish the 2019 strong and gain momentum towards the 2020 F4 United States Championship powered by Honda, Velocity Racing Development (VRD) will head to Sebring International Raceway with a pair of F4 drivers. Accompanying their three-driver F3 Americas efforts, F4 competitor Michael d’Orlando will return for his second event weekend with the Atlanta based squad while Ryan MacDermid will make the switch to the VRD program to complete the 2019 season.

“I am super excited to have two high quality drivers in our F4 cars, and I am confident that both will be able to battle at the front of the field,” explained Dan Mitchell. “Michael is returning to the series for his third weekend of 2019 and Ryan has shown pace and garnered consistent results in his rookie season, but we are aiming to improve that in his first event with us.”

As a rookie in the series, MacDermid has finished all but one race and has consistently been running in the top-ten. With a career best fourth place finish earlier in the year, the young Canadian sits 11th in the overall series point standings as he gains both knowledge and experience with each passing weekend. On the other end of the spectrum is d’Orlando who has only seen action in one event weekend this season but claimed points in in two of three race starts at the Mid-Ohio Sports Car Course securing sixth and seventh place finishes.

Mitchell continued, “I am confident in these two young drivers. I think we will all see a big improvement in Michael from weekend to weekend as he gets back into the flow of competition. Additionally, in a recent test at our home facility of Atlanta Motorsports Park with Ryan, I was really impressed. His speed on track was some of the fastest laps we have seen in an F4 car at our facility, and he gelled with the team right off the bat. I think these two drivers will not only complement one another but push each other for even greater results.”

With both drivers set to compete this coming weekend at the Sebring International Raceway, the duo really has their sights set on the October event at the Circuit of the Americas. Competing alongside the Formula One World Championship, both d’Orlando and MacDermid will not only battle for the top step of the podium, but their results will help springboard the Velocity Racing Development program into their offseason testing program and onwards into 2020.