VELOCITY RACING DEVELOPMENT DEBUTS AT COTA WITH CLARK AND COOK 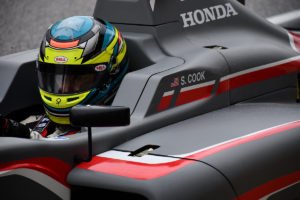 Announcing their formation only a few short weeks ago, Velocity Racing Development (VRD) made their F4 United States Championship Powered by Honda series debut this past weekend. Competing at the Circuit of the Americas with drivers Sabre Cook and Oliver Clark, the Atlanta, Georgia based program can learn from their experiences as they look onwards into 2019.

“It was a good first event for us and we are very happy that both cars finished both races in some difficult and tricky weekend conditions,” explained VRD personnel. “We had some disappointing qualifying results in the rain but rebounded nicely when the wheel-to-wheel action began. With the first event now under our belt, we can concentrate on our winter testing and development program.”

Oliver Clark would begin his quest in race one from the 22nd position and quickly advanced through the field. Running sixth on the final circuit, unfortunate contact from a fellow competitor forced Clark to retire from the race. Cook, who had contact on the opening lap of qualifying, improved from her 33rd place starting position to cross the stripe in P18, gaining fifteen positions throughout the short ten-lap race. 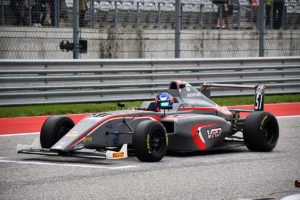 Back to the track on Sunday and competing just ahead of the Formula One World Championship United States Grand Prix, VRD branded drivers raced in front of a packed house of spectators. Clark and Cook put on a passing clinic and between the two of them, they advanced forward twenty positions to both garner top-fifteen results. Oliver Clark improved from his 16th place starting position to finish seventh while Sabre Cook rallied from 26th to end her weekend in 15th. By virtue of passing eleven cars, Cook was named the Sabelt America Hard Charger of the race and walked away with a pair of Sabelt race gloves.

“It was super cool to race on the same track during the same weekend as F1,” explained Clark. “I think we could have been in the top-five in both races this weekend if we performed better in qualifying. To show the speed that we did, I was very happy.”

“I was pretty gutted after qualifying,” explained Cook. “Not being able to turn a lap really put me behind before the green flag even flew. At the end of the day, I was able to march forward and gain more experience in only my second F4 event.” 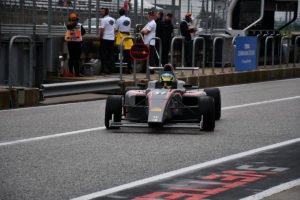 For more information on Velocity Racing Development and to find information on how to be involved with this new F4 US Championship Powered by Honda program, please feel free to contact Info@VelocityRacingDevelopment.com or by phone to 954.594.2686.