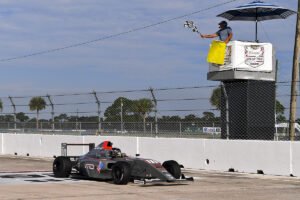 It was another winning weekend for Velocity Racing Development as Hunter Yeany added his sixth, seventh and eighth victories of the season as he swept the trio of events scoring maximum points. Entering the event as the current point leader, Yeany extended his championship points lead with two event weekends remaining. F4 United States Championship Powered by Honda teammate Erik Evans scored his career best finish adding two top-five results and a good points haul to move up in the overall standings.

After starting seventh and ninth on the grid, Evans and Yeany worked their way forward but not until a caution and eventual red flag for an extensive cleanup after a multi-car incident entering the first corner on lap two halted their progress. Gaining a few positions in the opening laps, Evans found himself in the second position while Yeany jumped forward five spots to fourth. The championship point leader worked his way into the top three and then into second as he and his teammate went wheel-to-wheel yet raced clean and with respect showing the true strength of the VRD program.

A few laps later, Yeany would make his bid for the lead as Evans followed him through to put the only two Velocity Racing Development drivers in the field in the front two positions. Yeany managed to hold his own through the final few laps to score the win and extend his championship point lead while Evans fell victim to a charging competitor but earned his first career F4 United States Championship Powered by Honda podium result.

Starting in the third row for the second wheel-to-wheel action of the weekend, Yeany closed the first lap in P3 as his teammate Evans was running second. Again, making his way to the front of the field, Yeany was involved in a two-car battle for the victory until his competitor slid off the track trying to hold pace with the eventual race winner giving Yeany his second win of the weekend. Showing his progression race after race, Evans pushed the third-place driver all the way to the finish line falling just .065 short of his second podium result of the weekend.

Yeany made it three-for-three on the weekend Sunday afternoon scoring a dominant victory. Claiming the fastest lap in race two and accompanying pole position for race three, Yeany was able to drive off the line and into the first corner in the lead and never look back. Forced to hold his competitor at bay on a late race restart, Yeany did exactly what was needed, taking his eighth race win of the season. Erik Evans was also in contention for another solid finish as he ran in the top-ten throughout the thirty-minute race, but was forced off track by a fellow competitor and sent down the running order to eventually classified in P18.

Matt Round-Garrido entered the VRD FR Americas program in Sebring in an order to put the team’s car back on track. Steadily improving throughout the race weekend, Round-Garrido earned top-ten finishes in both of Sunday’s races including a solid sixth place result in the third and final wheel-to-wheel race on the weekend. After starting ninth and working his way forward, Round-Garrido closed the gap to the leaders and continued to show great progress in his first ever FR Americas event weekend despite being a last minute addition to the program and with no prior testing.

With little time off between events, the Velocity Racing Development program will head south to the Homestead-Miami Speedway this coming weekend. With a Promoters Test Day planned for Thursday, official competition will get underway Friday through Sunday as the Atlanta, Georgia based team looks to continue their success.