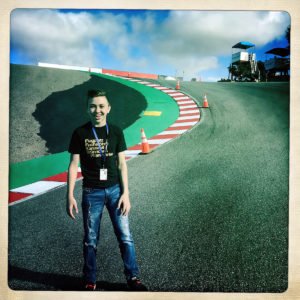 With the 2019 Cooper Tires USF2000 Championship now complete, Ayrton Ori is not slowing down anytime soon. As an Ambassador for the Human Growth Foundation, the young driver will take part in support events throughout the off season and into next year including this week’s fourth annual ‘Say No to Bullying Festival’ in Los Angeles, California (www.saynobullying.org/festival). Featuring Disney Kids, health care professionals, growth hormone patients and more, Ayrton will represent the motorsports community as he gives back to the community.

“I have been taking Human Growth Hormone Replacement Therapy since the age of seven,” explained Ori, who is a is a freshman at Lake Highland Preparatory School in Orlando. “I was so small that in karting, my dad had to carry my birth certificate around with us in order for me to compete. It was challenging but I am looking forward to sharing my journey, and in the beginning of that journey I did experience bullying.”

“Ayrton is a fighter, and he is doing things that other kids his age have a distinct advantage in due to their size,” added Keith Ori, father of Ayrton. “Bullying was something my son faced because he was initially so far below normal height; it was something we had to work through, and he’s looking forward to sharing his experience and how he overcame it.”

One of the ways Ayrton learned to deal with bullying was through martial arts, taking eight years of Gracie Brazilian Jiu Jitsu and achieving the rank of green belt in an effort to build confidence.

Ori continued, “Jiu Jitsu helped me a lot at that time of my life, but now that I’ve grown at a normal rate and I’m able to fight my own battles, I want to give back to the younger kids who suffer from bullying. I know first-hand what these kids are going through and will do whatever I can to help. It all starts this weekend at the Say No to Bullying Festival.”

As an Ambassador for the Human Growth Foundation (www.HGFound.org), Ayrton will be sharing his journey from the diagnosis of a partially functioning pituitary gland, his initially small stature, the bullying that came with it, how he dealt with it, and his maturation through a regimen of growth hormone replacement therapy which provides what his body should produce on its own, but does not.

This will not be the first occasion that Ayrton has been a public speaker in an ambassador type role; the young race car driver spoke to the youth of today about his experience in New Orleans in March and at the Kennedy Space Center just a few weeks ago.