UP AND DOWN WEEKEND FOR JASON BELL IN UTAH 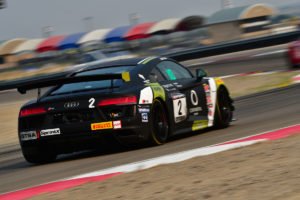 It was an up and down weekend for Jason Bell in Tooele, Utah as finishing results did not reflect the true pace of his Global Motorsports Group (GMG Racing) Audi R8 GT4 LMS entry. Taking on the Pirelli World Challenge program at the ultra-fast Utah Motorsports Campus, Bell showed great pace in practice but was forced to overcome some adversity in qualifying that set the tone for the rest of the race weekend.

“We had a great test here last week and that showed in our practice pace,” explained Bell. “We were quick right out of the trailer in were sixth quickest in the first session. The second session was even better as I was second for the majority of the run, but would end final practice in fifth. We had some cooling issues but think we have it sorted out for the weekend.”

Trouble plagued Bell from there on throughout the weekend as an ECU issue began in Saturday morning’s qualifying. His practice pace was immediately lost as he ran down the running order. Putting together a stellar lap behind the wheel, the car was not performing to its full potential, claiming the eleventh position in qualifying.

Saturday afternoon was the host of the first wheel-to-wheel action of the weekend and Bell would improve on his qualifying position. With the goal of moving forward, the Floridian pilot was able to secure another top-ten result in a stout field of competition.

Bell continued, “The competition in the GT4 class is fierce and when you have an issue in qualifying like I did, it is very hard to claw your way back. We showed good pace again, but our on track position was not ideal.”

The second and final race on the weekend took place on Sunday morning and disaster would strike for Bell. Involved in an incident that was no fault of his own, the GMG driver was out before the race even got going in the first corner melee.

“It really sucks for not only myself, but the team and my supporters,” expressed a disappointed Jason Bell. “The guys worked really hard as usual, and they deserve good results. With an impressive amount of talent in the GT4 class, some drivers were just a little overanxious in the first corner and I was collected. Not good for our program, but we need to focus forward.”