TYLER MAXSON SQUEEZES INTO THE TOP-FIVE AT LIME ROCK PARK 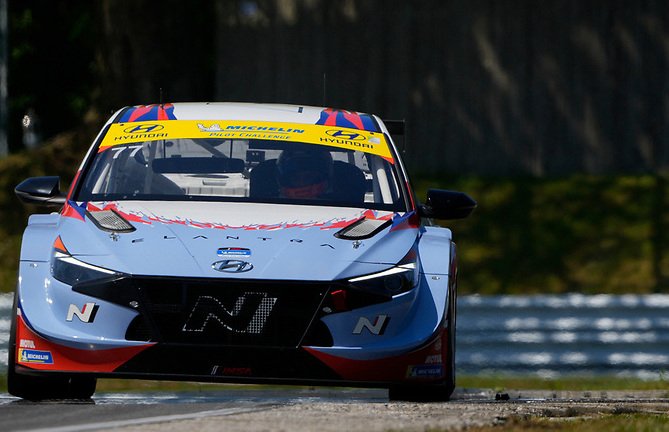 Tyler Maxson, driver of the #77 Hyundai for Bryan Herta Autosport, competed head-to-head with the top drivers in the IMSA Michelin Pilot Challenge series this past weekend at Lime Rock Park in Lakeville, Connecticut. Although he had hoped to claim his fourth pole position of the season, Maxson was still able to score a top-five qualifying result and drove to a fourth-place finish in the 120-minute race.

“Even though we weren’t able to get pole position today, we are in a great position to still get the win, come tomorrow morning,” explained Maxson, eager to get behind the wheel for race day starting in the fourth position. “Mason and I will do our best to bring home a win for the team.”

On Saturday, teammate Mason Filippi began the 120-minute race behind the wheel making a switch with Maxson at the mid-race distance. An issue would occur on the pit stop release as another driver was released into Maxson forcing him to take evasive action and into the pit lane exit sign. Stuck to the front of the car, the #77 was forced back to pit lane to have it removed and fell down the running order. Driving over 80 minutes of the two-hour race, Maxson was able to have another spirited drive towards the front. After being hit multiple times by a fellow competitor that did damage to the rear of his Hyundai, Maxon was able to work his way into the top-five before an incident from a fellow competitor elevated him to fourth in the final classifications.

Maxson expressed after the race, “I felt we really gave it all we had today. There was a lot happening out on track so we had to make sure we didn’t get caught in any of the action that could have ended our race early. We had some contact from another driver early in my stint and it did some damage to the rear suspension and toe link. It was difficult to drive but I was able to overcome the problem and do the best that I could. We have had some bad luck this season but hoping this result is the turnaround and the start of something good.”

Tyler Maxson will return behind the wheel of his Hyundai Elantra N TCR August 4th through August 7th at Road America in Plymouth, Wisconsin. Stay tuned to the Tyler Maxson social media pages for news, information, photos and results from the event weekend. To follow live timing or video, please visit www.IMSA.TV.