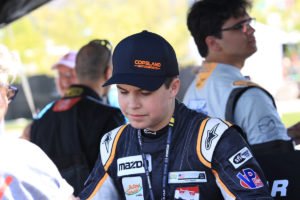 Making his Battery Tender Global MX-5 Cup Presented by BF Goodrich Tires series debut this past weekend, Georgia resident and 14-year-old Tyler Maxson made his second trip to the Circuit of the Americas (COTA) in 2019. Joining forces with the Copeland Motorsports program, Maxson performed well, despite some adversity during race one with a transmission issue.

After qualifying inside row six in the eleventh position, the multi-time karting champion fell back on the start after taking evasive action to miss a turn three incident that collected multiple cars. With the clean up taking several laps to complete, the future motorsports star put his head down when the track went green and marched his way forward.

“It was unfortunate to fall back on the start, but better to lose a few positions than be out of the race,” explained Maxson, who eventually crossed the stripe in the eighth position after running inside the top-five. “We passed a lot of cars today but had a transmission issue that cost me several spots as I tried to get the car into third gear.”

After an overnight transmission change by the Maryland based Copeland Motorsports, Maxson was back on the grid Sunday morning as he took the green from the eleventh position. With the goal to improve, Maxson once again drove well into the top-ten before finishing in the tenth position.

Maxson continued, “Yesterday we raced in the heat of the day and this morning we were on track in much cooler temperatures, and I think we missed the setup slightly. I am happy with a pair of top-ten results, but will definitely be pushing for more at the next event at Barber Motorsports Park. It was also a very big weekend for the team as all four cars finished in the top-ten during both race events.”

With only one weekend off, Tyler Maxson and his Copeland Motorsports outfit will be back on track at Barber Motorsports Park over the April 5-7 weekend.