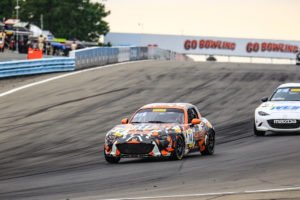 Heading to Watkins Glen International Raceway sitting second in the TCA TC America point standings, Copeland Motorsports driver Tyler Maxson was aiming for a solid performance. Already controlling the Rookie of the Year point chase, Maxson garnered a pair of podium results to leapfrog his way to the top of the overall championship standings.

“It was a great weekend for us on the points front and really puts us in the driver’s seat as we move towards the end of the season,” explained 14-year-old Maxson. “I am super proud of the team and what we accomplished as we were a little off on Friday. We managed to dig deep and work hard, and in the end, added another pair of podium finishes.”

While his championship competitors had some minor setbacks, Maxson rose to the occasion on Saturday by securing the pole position for the first wheel-to-wheel action. Looking to gain as many points as possible, the Mazda MX-5 ND2 driver crossed the line in the second position for his fifth podium result in as many races.

Returning to the track Sunday, the Copeland Motorsports driver repeated his performances from Saturday, but this time starting from the third position. Standing on the second step of the podium for the second straight day, Maxson claimed enough points to overtake his rivals and leave Watkins Glen as the TCA Championship Point Leader.

Maxson continued, “The target is on my back now, and we need to continue the consistent results that we have been having. It is important to maximize points every weekend, and when we can’t, we need to limit losses. Really looking forward to the next event.”

With three weeks off until the next event, Maxson will return to Road America, in Elkhart Lake, Wisconsin, a facility that he showed great speed at earlier in the year. Taking place over the September 20-22 weekend, Maxson will enter rounds thirteen and fourteen with the goal of extending his point lead during the penultimate event weekend of 2019.