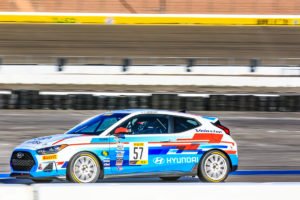 With excitement building for the Hyundai expansion in the TCA class, Floridian Tyler Gonzalez was able to hop behind the wheel this weekend to put the car through its paces. Taking on the Las Vegas Motor Speedway Roval as part of the SRO Motorsports Group promoted TC America program, Gonzalez was a member of the Bryan Herta Autosport program for the season finale.

“What an honor to be part of the Bryan Herta Autosport program and work with such an iconic name in motorsports,” explained Gonzalez. “A huge thank you to Bryan and the team for all of the hard work and allowing me to be the first ever driver behind the wheel of the new Hyundai TCA car. Race one was a little difficult for me. While forced to start in the back due to the red flag in qualifying, I was able to work my way up to seventh from 14th while fighting with some issues with the ECU. We know what the issue is and will be able to address in more detail during the off season.”

After an issue in qualifying that saw a warning light come on the dash during Tyler’s flying lap, the young driver played it safe and immediately got off throttle and pitted to avoid doing any damage to the car. After diagnosis by the crew, Gonzalez was sent back on track, only to be caught out by an untimely red flag that did not allow him to complete a circuit. Forced to start race one from the tail of the field, Tyler did what he could to salvage a result all while gathering data for the team.

“In race two, we were able to battle our way to a top-five finish, and we were able to show great speed in the beginning, during the middle and at the end of the race. Definitely learned a lot throughout the weekend and have a good basis going into the off season. I am sure that we will complete a lot of test laps, but again just need to say thank you to the entire crew and Mr. Herta for the amazing opportunity and all of the support.”

“Racing in the TCA class has been great. The starts have been relatively clean. This Las Vegas track was really difficult to pass on, but our car really shines under braking. This is the first time that I have raced in a multi-class division, so I was learning both the car, series and the competition. It is important to race your race, but I also have been getting used to the much faster TCR cars appearing in your rear-view mirror. I am really looking forward to the 2020 season.”

For more information and/or partnership opportunities on Tyler Gonzalez, please contact Alberto Gonzalez at 407.466.9083 or via e-mail to superiorcoatingsystems@yahoo.com.