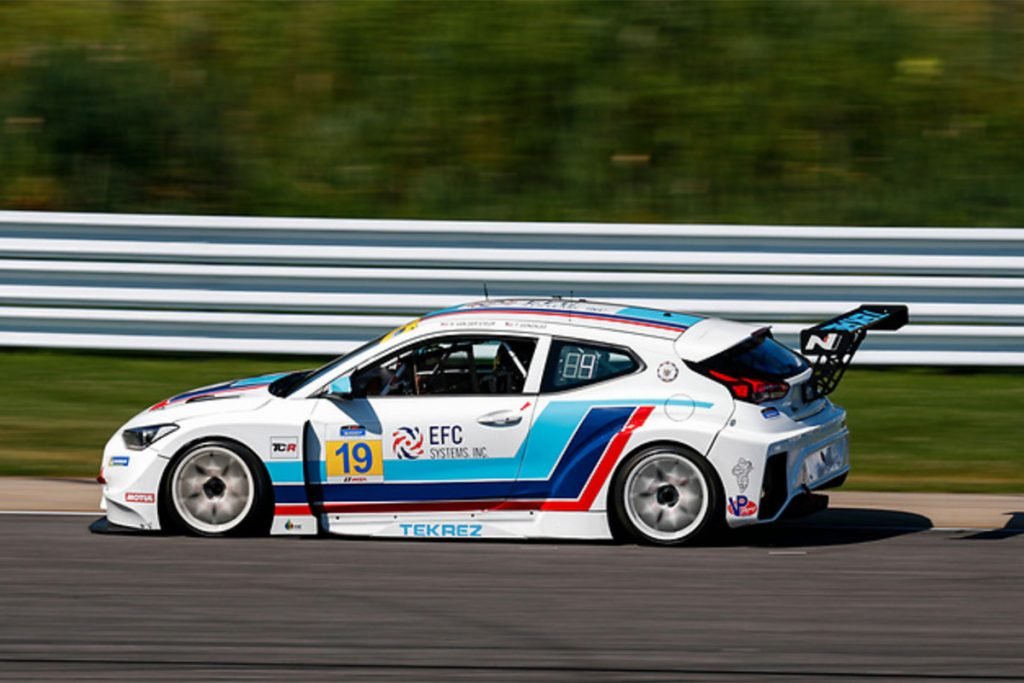 Racing is a sport that warrants one of two emotions by the end: victorious bliss or total heartbreak. This past weekend the latter happened to Tyler Gonzalez, driver of the #19 Hyundai Veloster N TCR with Rory Van Der Steur Racing, as his tenth to second place comeback stint ended just shy of the finish line.

“We had the speed this weekend and it was all looking good,” explained Gonzalez. “The pace was there but the luck did not last the full race distance.”

With teammate Rory Van Der Steur starting fifth and piloting the blue and white #19 car in the first 45 minutes of the race, it was Gonzalez’s turn to take charge of the wheel during the mandatory driver change. Entering the race in the tenth position, Gonzalez had to push hard as he needed to make up some ground.

Known for his aggressive and strategic driving, this was no problem for the almost 18-year-old driver despite also having to serve a drive through penalty for a tire left in the pit exit of another car. With 25 minutes remaining in the race, Gonzalez was already up to fending, fending off the challenges from those behind and battling in the front for top honors. With only two laps left and running in second, a podium, and even a win was looking promising, however, a bit of contact from a trailing competitor caused damage to the left rear tire, hindering Gonzalez’s speed, causing him to retire from the race before crossing the finish line.

“This one is going to hurt for a while. I tried to keep the car going to the finish, but the damage was too severe to continue,” says Gonzalez. “The amount of work put into the race was just thrown away to no fault of my own. It’ll be a hard one to get over since we were so close to our first win, but we’ll keep going and be ready for Road America.”

Gonzalez and teammate Rory Van Der Steur will continue racing for Van Der Steur Racing in Wisconsin at Road America in two weeks, August 4th through the 7th. Stay tuned to the Tyler Gonzalez social media pages for news, information, photos and results from every event weekend. You can find him via his social media pages at ‘Tyler Gonzalez Racing’. To follow live timing or video, please visit www.IMSA.TV.