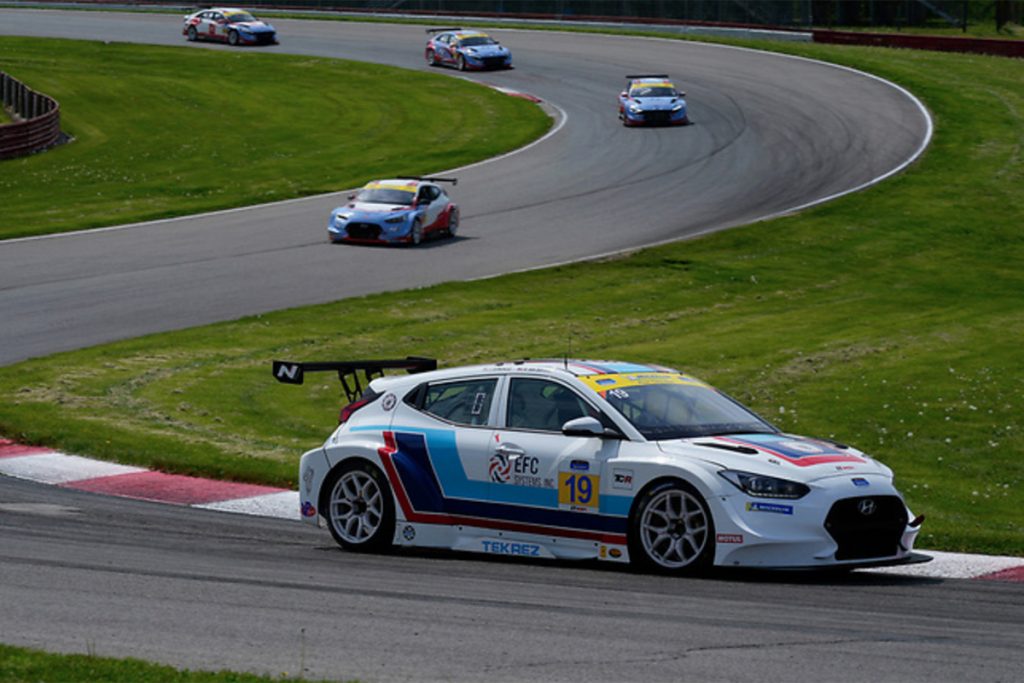 Competing in both the Idemitsu Mazda MX-5 Cup Presented by BF Goodrich and the IMSA Michelin Pilot Challenge programs, Floridian Tyler Gonzalez had a busy event this past weekend at the famed Mid-Ohio Sports Car Course in Lexington, Ohio. Racing out of the Copeland Motorsports program in Mazda MX-5 Cup, Gonzalez earned a seventh place finish in the second race of the weekend while he and Rory Van Der Steur steered their Hyundai Veloster N TCR to a fourth place result in their Michelin Pilot Challenge program.

“It was a busy weekend for sure but as a racer, I would not have it any other way,” explained Tyler Gonzalez. “We did not get the results we wanted, or deserved, but left Mid-Ohio with two top-ten finishes and some points towards the championship points battle.”

Piloting the #19 Hyundai in the Michelin Pilot Challenge as a privateer effort with the Van Der Steur Racing program, Gonzalez and Van Der Steur were able to score the third fastest lap in qualifying and inside row two starting spot for Saturday’s race. Fresh off a podium at the WeatherTech Raceway Laguna Seca a few weeks ago, the pair were looking for back-to-back podium results but missed it by just one position. Scoring the fastest lap of the race, a drive through penalty relegated them down the running order before driving back to a fourth-place finish.

Gonzalez added, “We had the speed but could not maintain the pace to the factory efforts. It was a great showing and solid points day so we will take it and move on to the next.”

In his Idemitsu Mazda MX-5 Cup Presented by BF Goodrich effort, Gonzalez would start on the back foot with a disappointing fourteenth place result in qualifying. Looking to move forward in the first wheel-to-wheel action of the weekend on Saturday, the #51 entry would be a victim of unfortunate circumstances and eventually classified in the 26th position after the nine lap race.

Fighting a weird mechanical gremlin with the car throughout Friday and Saturday, Gonzalez returned to the track on Sunday and looked to rebound from the day prior. Starting dead center of the twenty-nine car field as he rolled off the grid in fifteenth, Gonzalez was able to advance his Copeland Motorsports entry forward to a seventh place result in the twenty-eight lap round six despite the nagging issue still very much apparent.

“Happy to finish the weekend with some solid results which should help my confidence and build momentum towards the next race,” continued Gonzalez. “A huge thank you to Copeland Motorsports, Van Der Steur Racing and all my other partners and supporters. Let’s go win the next one!”

With six weeks off, Gonzalez will now shift his focus to the Watkins Glen International Raceway over the June 23-26 weekend where he will once again compete in a two-program effort.