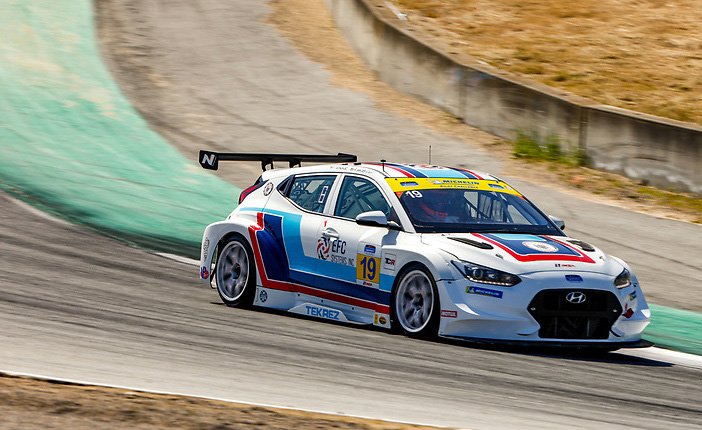 Tyler Gonzalez hit the hot track of WeatherTech Raceway Laguna Seca in California this past weekend for the third round IMSA Michelin Pilot Challenge. Alongside his teammate and co-driver, Rory Van Der Steur, Gonzalez would pilot his Hyundai Veloster N TCR aiming for a podium result. Hot off a solid result at the Mid-Ohio Sports Car Course in the World Racing League, Gonzalez was ready to prove it’s about the driver and not the car. 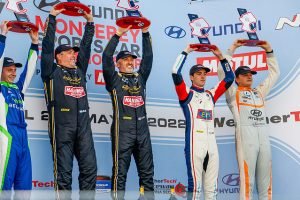 The weekend started on Friday with an hour-long practice around the 2.2-mile paved natural terrain road course. The slight elevation change combined with the hot sun was an obstacle for any skilled driver. Taking turns to get accustomed the track, Gonzalez and his teammate powered through for the second half of practice ending with a seventh-place time in class.

“I think we really have something here,” expressed Gonzalez. “There is more speed in the Hyundai than we showed, and I think we can become a big factor in the race. We just need to make sure that we are there and capitalize when opportunities present themselves.”

At mid-day Saturday, the seriousness of the weekend set in as it was time for qualifying. Going into the important session, the team and driver duo were feeling good about their chance. With Van Der Steur taking the qualifying duties, he managed to put the #19 entry into the fourth position and an outside row two starting spot for the wheel-to-wheel action.

Next up and only a few hours later, was the two-hour long IMSA Michelin Pilot Challenge race. After holding steady in the pack, Van Der Steur handed the controls to Gonzalez at mid-race distance as the pair steadily ran inside the top-five. Gonzalez would push hard in the latter stages of the race, gaining the position needed to earn a third-place result and their first podium result of the 2022 race season. 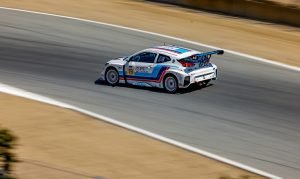 Gonzalez added, “I knew it was possible, and I had a feeling after practice that we could challenge for a podium result. A huge thanks to the team and all of our partners for the ongoing support. We are already switching gears and looking forward to the next race…only two more positions on the podium to climb to the top.”

Tyler Gonzalez will be on track next in two weeks at Mid-Ohio Sports Car Course, May 13th through May 15th for a double header, racing in both the Mazda MX-5 cup and the IMSA Michelin Pilot Challenge. For more information on Tyler Gonzalez, please search for him via his social media pages at ‘Tyler Gonzalez Racing’.