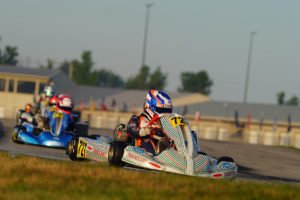 Always a threat for race wins and championships in every karting event, Supertune lived up to that again this weekend for the Superkarts! USA (SKUSA) Pro Tour Finale. Taking place at New Castle Motorsports Park only an hour from their shop, the Tony Kart program managed to secure two main event victories, four podium results and two championships to close out their 2019 Pro Tour campaign.

“A huge thank you to all of our drivers, tuners, mechanics, coaches and family members for all of their hard work and support to make 2019 such a success,” expressed Ben Cruttenden. “It was a busy weekend as we had more drivers than we have had in the past, but it turned out well.”

Freddie Slater would lead the way for Supertune in X30 Junior on Saturday as he drove his way to a third place podium result. Garnering enough points to secure the SKUSA Pro Tour Championship, Slater elected not to compete on Sunday to have no risk of a non-droppable disqualification. Cole Morgan chased Slater across the line to take home a fourth place result but was unable to match his pace on Sunday finishing 19th. Younger brother Carson Morgan had a trying weekend while John Burke rebounded from his 40th place DNF on Saturday and drove to the top step of the podium on Sunday.

Cruttenden continued, “John was a threat for victories both days and his speed was apparent when we tested here two weeks ago. He is a very smart driver that understands how to use the draft, and it benefited him a lot this weekend. A huge congrats to him on his win and Freddie on his championship.”

Alfie Slater, younger brother of X30 Junior Champion Freddie Slater, competed in the Micro Swift class gaining a pair of top-ten results. Often seen running inside the top-five on Saturday, the main event did not go his way as he crossed the line in P8. Sunday would prove to be much better for the youngster as Alfie battled hard for a podium position, narrowly missing out finishing fourth. 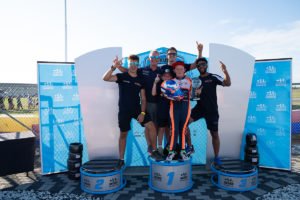 Kai Sorensen and Anderson Leonard have been two of the hottest Mini Swift drivers in the country in 2019, and they continued that this weekend. Sorensen was the first of the drivers to the finish line on Saturday but an on track penalty relegated him down to tenth on the results sheet. Disappointed but not unfazed, Sorensen returned to the track on Sunday and returned to the top, winning the prefinal only to finish second in the day’s main event. The only driver to beat Sorensen on Sunday was his teammate, Anderson Leonard, who scored a pair of podium results over the weekend, finishing third on Saturday and leveled up to the top of the blocks on Sunday. Courtesy of their results over the weekend, Sorensen was awarded his third major championship of 2019 being named the SKUSA Pro Tour Mini Swift Champion while Leonard garnered enough points to stand on the championship podium in third.

Enzo Deligny, who finished 19th on Saturday, put three Supertune drivers in the top-ten on Sunday finishing tenth after starting the day’s final inside row four. Lucas Szabo crossed the strip 24th on Saturday, but continued his forward progression on Sunday turning his tenth place qualifying effort into a 13th place result at the end of the day. Xander Reed gained more experience with each passing lap and hovered around 20th for the entire event weekend taking home a pair of 22nd place results

Cruttenden added, “The Mini Swift class is stacked full of drivers and to have five finish inside the top-22 and three inside the top-ten shows something about our program.”