TWO WINS CAP OFF A SOLID MONTH OF JANUARY FOR SUPERTUNE 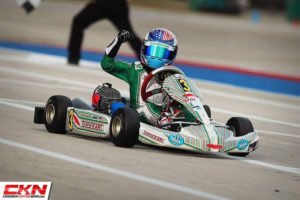 After debuting last November at the Superkarts! USA (SKUSA) SuperNationals and topping the podium blocks in X30 Junior with Jeremy Fairbairn, Supertune continued their winning ways in the first month of 2019. Competing at both the SKUSA Winter Series and the ROK Cup Promotions Florida Winter Tour, Supertune added another two major race wins and scored several top-ten results throughout the past two weeks of competition.

Taking place at the AMR Motorplex in the shadows of the Homestead-Miami Speedway, Supertune was victorious in the IAME Mini Swift class with Kai Sorensen. After contact took him out of position for a podium result on Saturday, Sorensen returned to the track Sunday to put his new Tony Kart chassis at the front of the field to take the checkers after scoring the pole position and heat race victory. Anderson Leonard made it two Supertune drivers in the top-five on Sunday as he drove forward to a solid fifth-place finish.

Reigning SKUSA SuperNationals X30 Junior Champion Jeremy Fairbairn moved to the Senior ranks and though he is a rookie on paper, he did not show it on track. Battling a strong field of X30 Senior drivers, Fairbairn secured a sixth-place finish, a great Senior debut for the young Floridian.

Karsyn Walters joined the Supertune squad in Homestead and was rewarded with a fourth-place result for his efforts. Competing in the IAME Micro ROK class, Walters battled at the pointy end of the field and could be a threat for podium results at the next round in February.

Packing up Sunday and driving a few hours north to Miami Gardens, Florida for the opening round of the ROK Cup Promotions Florida Winter Tour, Supertune driver Kai Sorensen continued his winning ways. Competing in the Vortex Mini ROK class and qualifying on the pole by a healthy margin, claiming all three heat race wins and pole position for the main event, Sorensen went on to take a massive 6.7-second victory in the weekend’s main event. Enzo Deligny made it a 1-2 finish for Supertune throughout all three heat races claiming three second place results and the outside front row starting position next to Sorensen for Sunday’s main event. With a podium and potential win on the horizon, Deligny was out of the race before he even had a chance as a mechanical failure before the drop of the green flag took him out of contention. Anderson Leonard narrowly missed his second top-five result in as many weeks taking home a sixth place finish as he shifts his focus to February’s wheel-to-wheel competition. 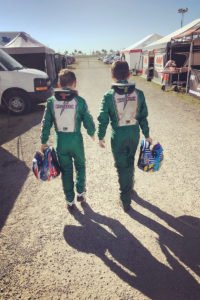 Jeremy Fairbairn continued his top-ten pace in ROK Senior as he was able to put his Tony Kart firmly inside the top-ten throughout the temporary circuit event. Battling hard to a seventh place finish on Sunday, Fairbairn has the speed and experience to make a run at several major Senior race wins in his rookie season.

Micro ROK saw Walters back in action as he was joined by Supertune newcomer AJ Farag. Walters solidified his existence in the top-five with a fifth place finish, backing up his fourth place run a week prior. Farag progressed nicely through the weekend and secured an eighth place result after the final checkered flag had flown on Sunday.

“It has been a great start to 2019,” explained Cruttenden. “We have a lot of racing in the first quarter of the year and we are just getting started. Our team is small, but mighty, as we have been close to the front of the field, if not at it, in every event we have competed in. We have a few openings remaining for the remainder of the 2019 season as well as Tony Kart chassis and OTK products in stock and available.”

For more information on Supertune, race team opportunities at the SKUSA Winter Series and Florida Winter Tour, or onwards into 2019, OTK product sales, or engine and dyno services, please contact Ben Cruttenden at 317.900.3141 or via email to Ben@Supertune.us. Supertune can also be found through their social media accounts at Supertune USA.