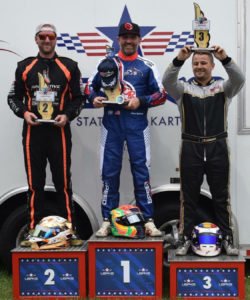 “It was a great weekend in Indiana,” explained Mike Speed. “We wanted to get up to speed quickly and qualify well and we were able to do that. This place is always a little racy due to the draft but I think our drivers gained a ton of experience that they can utilize for future events.”

Leading the way with one victory and two podium results each were X30 Junior driver Luca Mars and Masters pilot Scott Roberts. Roberts was able to sweep the competition on Saturday claiming the pole position, two heat race wins and main event victory and returned Sunday to stand on the second step of the podium. Mars stood on the third step on Saturday after a second place qualifying run in the morning before coming from outside the top-twenty on Sunday to take the win.

Joining Mars in the X30 Junior category were Luke Lange, Justin Arseneau and Kyffin Simpson, who all faired well in the three-day event. Arseneau showed great speed at New Castle and was near the pointy end of the field as he joined Mars on Saturday’s podium with a second place effort. Lange had his best weekend behind the wheel of a Speed Concepts Racing Tony Kart, securing a pair of top-ten results, including an impressive drive to fifth on Saturday. Returning to the seat after a long hiatus was Kyffin Simpson, who continuously improved throughout the weekend, coming home with a fifth place finish at the end of the X30 Junior main event on Sunday. 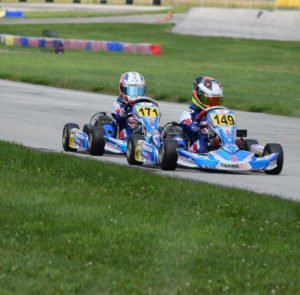 Speed continued, “We had a little bit of everything in the Junior class. Drivers that started up front and stayed there while others who came from the back of the field to the front. All in all it was a great experience for our drivers and we are looking forward to our next event in two weeks’ time at this same facility.”

Noah Baker and Paul Bocuse would fly the Speed Concepts Racing banner in IAME Mini Swift and both drivers ran in the top-ten through the majority of the event. Baker claimed the pole position and an eighth place finish on Saturday before finishing fifth on Sunday, while Paul Bocuse ended his weekend with seventh and 14th place finishes. Gaining experience with each passing lap, both drivers were able to better understand the importance of qualifying well and the benefits of the draft at New Castle.

With a test weekend planned for this coming weekend, Speed Concepts Racing next official event will be final round of the Superkarts! USA Pro Tour at the New Castle Motorsports Park over the August 10-12 weekend.