TWO WINS AND A PODIUM CAP OFF 2020 FOR TEAM BENIK 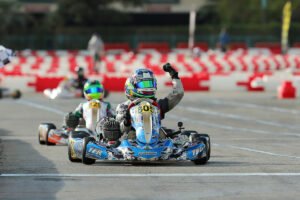 It was a nearly perfect way to complete the 2020 ROK Cup USA season as Team Benik found themselves victorious in the talent filled Micro ROK class at ROK the RIO. Showing pace all weekend long, Asher Ochstein turned his pole position winning run on Thursday into victory on Sunday to be named the 2020 ROK the RIO Micro ROK Champion.

“Great weekend for Team Benik and the Benik Kart family,” explained Nick Mitchell. “To come to Las Vegas and walk away with two ROK the RIO wins and three podiums shows our strength in multiple classes. Add in several more top-five and top-ten results and it was definitely worth the trip. A huge thanks to the entire Benik Kart family for all of their hard work and support. We can’t wait for 2021.”

After claiming the pole position and three of four heat race wins, Ochstein led early in the Micro ROK final but fell to second over the middle stint of the race. Biding his time and stalking the leader, Ochstein made the move with two laps remaining to jump to the point and never look back. Not even being forced to defend on the final lap, the Benik Kart driver drove to the win, adding to his ROK Fest East victory earlier in the season.

Fellow Micro ROK Benik driver Sarah Bradley was in the hunt all weekend long and ended her ROK the RIO in the fourth position. With her highlight being the heat one second place result to put a pair of Beniks on the front row for heat two, Bradley never ran outside the top-ten and was a deserving competitor. Racing out of the Zanella Racing camp, Marco Romero had a solid weekend and finished third on track but was removed from the results following post-race technical inspection. Royce Vegas and Sebastian Cortes also competed in the Micro ROK category showing steady improvement and gaining experience throughout the race weekend.

In the Junior ROK class, it was Jeremy Fletcher that led the trio on the results sheet with a podium finish after Sunday’s main event. Running into some trouble in the heat races and forced to battle his way back, Fletcher led the main event at one point but had to settle for the final step of the podium. Team Benik / 645 Motorsports newcomer Thomas Annunziata was also at the front of the Junior ROK field and similar to Fletcher, led the main event on occasion but contact pushed him back to tenth in the final results. After qualifying third, Michael Costello had top-ten pace throughout the weekend and ended his weekend in eleventh. Forced to battle his way back from a poor heat race result due to contact, Costello has shown his prowess in the junior ranks. 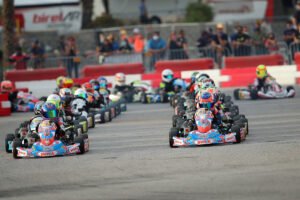 Annunziata was victorious earlier in the day securing Team Benik / 645 Motorsports’ first ROK the RIO win of the day. Taking the lead late in the Junior 100cc event, Thomas drove to the race win after being up front all weekend long including the heat two win on Friday. Logan Vajda had one of his best career weekends to date qualifying eighth and battling in the top-ten throughout the heats. Gaining experience with each passing lap, Vajda started the main event in tenth and closed his weekend with a solid performance.

Racing out of the Zanella Racing camp aboard a Benik Kart, Diego Ardiles finished his weekend in tenth.

With the 2020 ROK Cup USA season now complete, Team Benik will shift their focus to the 2021 Florida Winter Tour. Beginning immediately, Team Benik will be looking to fill positions within their program as they aim to continue their winning ways next season.

For more information on the BENIK Kart, or the Team BENIK, please contact Nick Mitchell via e-mail to Info@Benik-Kart.com or by phone at 561.348.4406.