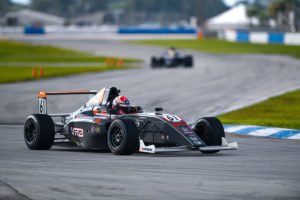 With fifteen rounds now complete, Velocity Racing Development (VRD) is heading to Circuit of the Americas (COTA) for the final two rounds of the 2019 F4 United States Championship powered by Honda season. Returning with drivers Michael d’Orlando and Ryan MacDermid, VRD will be looking to capture season high results before heading into the offseason of testing.

Joining the Formula One World Championship for the United States Grand Prix, Velocity Racing Development will be participating in their most prominent event of the season. With fans and viewers around the world and racing in front of some of the biggest names in racing, VRD is looking to impress. Claiming race wins in the F3 Americas effort in 2019, the Atlanta Motorsports Park based team would like nothing more than to end the 2019 F4 edition of the series with a win. With MacDermid and d’Orlando both in their F4 United States Championship Powered by Honda rookie season, this will be their first opportunity to compete at famed Circuit of the Americas.

In preparation for the event, VRD sent both d’Orlando and MacDermid to Circuit of the Americas last week to test in the F3 Americas cars. As the only team competing in both the F4 US Championship and F3 Americas, they are only a few of any F4 drivers who have had an opportunity to test at COTA leading up to the event. Taking the time to learn the 20-turn, 3.427-mile course in faster and more powerful cars has left both drivers more prepared for the upcoming finale event.

“I am expecting big things from both Michael and Ryan this weekend,” explained Dan Mitchell. “Both have been consistent when in the car this year, and both had a great test a few weeks ago. We are aiming for the top step of the podium and look to springboard that momentum into the 2020 season.”

Due to the scope of the event, drivers will have limited practice time on track this Friday morning before heading straight into qualifying later that afternoon. Finishing out the season, VRD will hit the track two more times, once on Saturday and again on Sunday, for the final two rounds of the 2019 season.

Circuit of the Americas Weekend Schedule

Velocity Racing Development has already confirmed a pair of drivers for their 2020 F4 United States Championship Powered by Honda season. With the opportunity to run one additional competitor in F4, as well as three drivers in their F3 Americas Powered by Honda campaign, interested drivers are urged to contact VRD at their earliest convenience to take full advantage of the winter testing program that the team has planned.