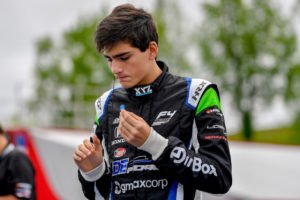 Competing in his first career F4 United States Championship Powered by Honda event, young Gui Peixoto and DEForce Racing ended the weekend on a positive note having just graduated from the karting ranks. Proving his speed from the very first practice session, Peixoto ended his series debut with a pair of top-ten results after scoring the fourth quickest lap on Thursday’s official practice sessions.

“I am very happy with my first F4 weekend,” explained Peixoto. “There isn’t a better way to gain experience than real racing. The conditions were very tricky and not favorable to me as I have never driven on the wet compound tires, so we chose to do a cautious weekend targeting to finish every race and bring as many points as we could. We achieved a pair of top-ten finishes but, unfortunately, I made a small mistake and spun to avoid a collision in race two while fighting for the fifth position but managed a clean race three to finish in the points again.”

After taking part in the promoters’ test day on Wednesday and the two official practice sessions on Thursday, the grid for race one would be set from practice times due to severe storms that cancelled qualifying. Lining up on the outside of the second row for not only his first career open wheel start, but also his first career formula car race in the rain, Gui Peixoto drove to a seventh place result.

With the second wheel-to-wheel race of the weekend being set from lap time in race one, the young Brazilian lined up in eleventh. Battling hard for solid finish, Peixoto drove to P6 and while fighting for fifth, spun and was relegated down the running order. Unable to set a quick lap in race two for the race three grid, the DEForce driver began his third and final race of the weekend in the thirteenth position.

Looking to move forward and end up back in the points, Gui Peixoto did just that slicing his way to tenth from 13th. Achieving all of his goals he and his team set for the weekend, the talented Brazilian will now shift his focus to the second event weekend of 2019 in just under eight weeks’ time.

Peixoto added, “It was a great experience for me. I learned a lot and am very confident for this year. Looking forward to the next event in Pennsylvania.”

For more information on Gui Peixoto or information on to become part of his motorsports program, please contact XYZ Talents Daniel Rodrigues via email to daniel.rodrigues@xyztalents.com or visit Gui Peixoto via his social media pages on Facebook, Twitter, and Instagram at @guilhermepeixoto99.