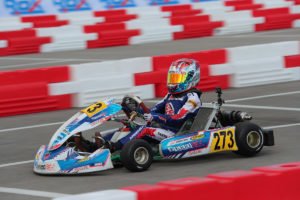 While the Speed Concepts Racing program will compete at the Superkarts! USA (SKUSA) SpringNationals in Utah, two of their top junior drivers will take on the world at the 2019 FIA Academy Trophy. With the first event set to take place this coming weekend in Wakersdorf, Germany, American driver Luca Mars and Canadian standout Justin Arseneau will both represent Speed Concepts Racing in their quest for European glory.

“Luca and Justin have shown great speed and have claimed race wins and championships so far in 2019,” explained Mike Speed. “We will miss them in Utah this weekend, but wish them the best of luck in Germany.”

Competing in the FIA Academy Trophy, countries from around the world have the opportunity to appoint one driver to compete in the Olympic style karting event. Mars will represent the United States while Arseneau will fly the colors of the Canadian flag. With the first event in Germany this coming weekend, the pair of drivers will also travel to Italy in June and September.

Speed continued, “Both of these drivers have incredible talent which has been shown throughout the season. Luca claimed the Florida Winter Tour ROK Junior Championship as well as the SKUSA Winter Series X30 Junior title while Justin was a multi-time race winner in both series. They will represent Speed Concepts Racing in Europe, and we will be following their progress and offering help when and where ever possible.”

Next on the docket for Speed Concepts Racing will be a West Coast trip to Tooele, Utah for the Superkarts! USA SpringNationals. Taking on the Utah Motorsports Campus, the bar will be set high as the Orlando, Florida based team will be fighting for race wins and podium results in the Beehive State. Stay tuned for the event preview later this week.