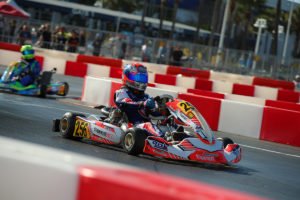 It was a strong weekend to close the ROK Cup USA Florida Winter Tour as Speed Concepts Racing took on the temporary circuit in the parking lot of Tropicana Field in St. Petersburg, Florida. Claiming a pair of pole positions and three heat race wins, all six Speed Concepts Racing drivers finished in the top-twelve on Championship Sunday.

“It is a quick turnaround for us, but it was a solid close to the Florida Winter Tour,” explained Mike Speed. “All of our drivers ran in the top-ten, and we were able to challenge for wins in both Junior and Senior. Five of six of our drivers qualified in the top-ten including three in the top-five in ROK Junior.”

In ROK Junior qualifying, Jack Jeffers claimed the pole position as Jace Park, Jack Paul Bocuse and Kyffin Simpson were all in the top-ten. Ayden Ingratta, in his first temporary circuit in a full-size Junior chassis, qualified 19th but progressively worked his way forward throughout the weekend. Jeffers would score a heat race win as he and the Speed Concepts Racing junior contingent were consistently in the top-five on the speed charts throughout the heat races and prefinal, and in heat three, ran first through fourth for position in the opening set of laps.

In the main event, it was Jace Park who led a trio of drivers in the top-ten as his fourth-place effort narrowly missed the third and final step of the podium. Jeffers and Bocuse followed closely in fifth and sixth while Ayden Ingratta and Kyffin Simpson crossed the stripe in 11th and 12th respectively.

Luca Mars was one of the drivers to beat in ROK Senior, but his pole position run was the only highlight of Friday. During heat one, contact after the green caused a broken chain and Mars failed to finish. Sweeping heats two and three to take victories, the senior rookie moved from fifth to third in the prefinal.

Championship Sunday saw Mars move into second immediately as the race went green, as he worked with the leader to draw away from the field. Stalking the leader early and taking the top spot on lap thirteen, Mars was able to lead ten laps of the 26-lap main event. Overtaken on lap fourteen, Mars was unable to find a way by the eventual winner and had to settle for the second step of the podium. 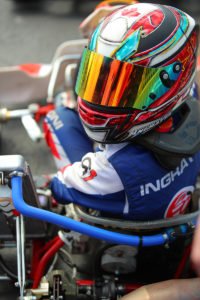 Courtesy of their results, Mars was named the ROK Senior Vice Champion while Jace Park finished third in the ROK Junior championship battle.

Speed continued, “Thank you to the ROK Cup USA staff for all of their hard work and support throughout the season. While some calls did not go our way on and off the track, we really do appreciate their efforts and they put on a fantastic event.”