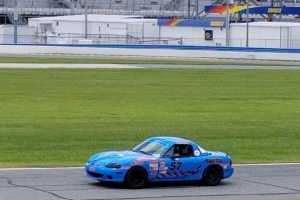 Competing at the Daytona International Speedway this past weekend, Tyler Gonzalez scored another pair of podium results at one of the most prestigious racing facilities in the world. Running his Spec Miata, the Floridian driver led early and often but when the final checkered flag flew, he stood on the third step of the podium for both events over the weekend.

After claiming the pole position for race one, Gonzalez battled at the pointy end of the field running in either first or second during the first half of the race. Working with a fellow competitor to utilize the draft and draw away from his fellow rivals, his drafting partner suffered a mechanical issue leaving Tyler to fend for himself.

“Without a drafting partner at Daytona, I was just a sitting duck,” explained Gonzalez. “The three cars behind me were able to work together and close the gap. I was leading on the final lap, all the way until the final corner, but their run was just too strong to hold off. In a drag race to the line, both drivers utilized the draft and went around me, one on the high side and one on the low. It was a photo finish and I finished in third, just .03 behind the winner.”

Race two would see a similar break away as this time there were two groups of two cars running nose to tail only a few seconds apart. Gonzalez, heading the train of the second group, once again lost his drafting partner due to a mechanical issue leaving him to run alone for the rest of the race. Focused on hitting his marks and hoping the lead duo would mix it up, the action ahead never materialized and Tyler finished third for the second event in a row.

Gonzalez added, “When I was sitting there in the gap between second and fourth, I thought I was in trouble again. No drafting help to catch the leaders or defend from the fourth place driver, but I managed to keep pace and hit my marks to hold on to P3 and ran all my laps within two tenths of one another.”

Keeping in the seat and gaining as much experience as possible, Tyler Gonzalez will continue to contest events whenever possible as he looks to make a return to national level racing in the very near future.

For more information and/or partnership opportunities on Tyler Gonzalez, please contact Alberto Gonzalez at 407.466.9083 or via e-mail to superiorcoatingsystems@yahoo.com.