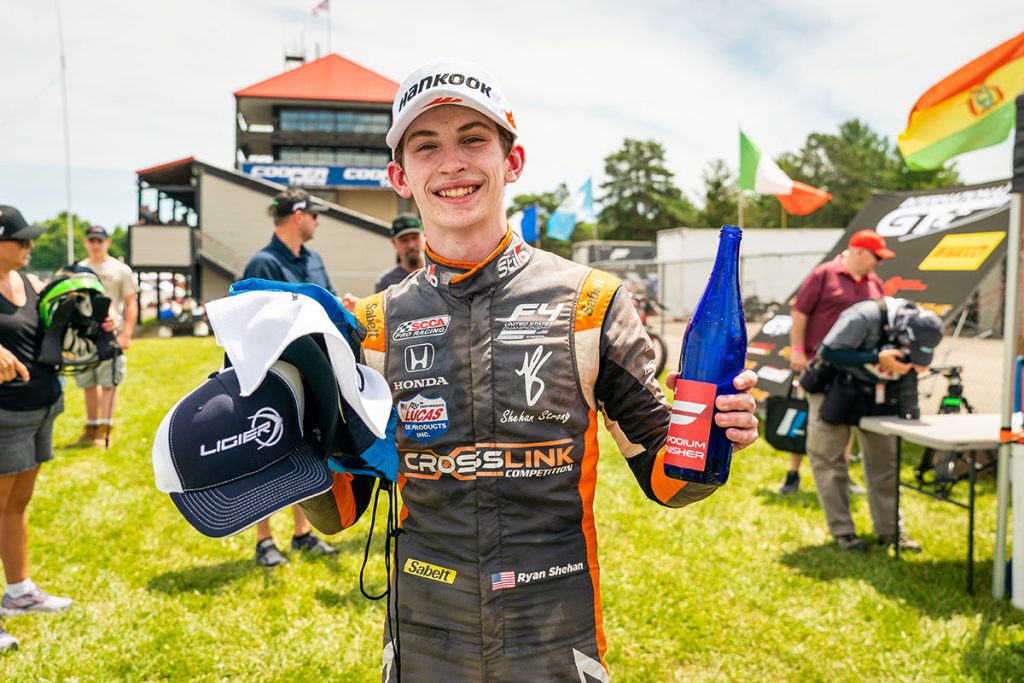 Returning to the seat of his #66 Crosslink Kiwi Motorsport machine this past weekend, Texan Ryan Shehan was back on the podium. Taking on the F4 United States Championship Powered by Honda, Shehan earned two podium results at the 2.4-mile, 15-turn legendary facility, and completed his career best weekend in open wheel racing. 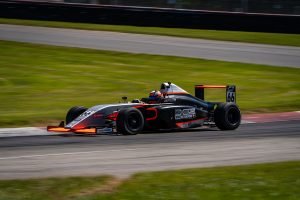 After the Promoters Test Day on Thursday and the one and only official practice on Friday morning, it was straight into qualifying and Shehan earned his best qualifying result of the season. Qualifying fourth and lining up on the outside of row two for the first wheel-to-wheel action of the weekend, it would be all eyes on race one Saturday as the Austinite would look to fight for the win.

“I am excited to have my best starting position ever in F4,” explained Shehan. “I have one podium earlier this year, and the goal is to double that total up tomorrow during the first wheel-to-wheel action on the weekend.”

Lining up fourth, the lights would go out and it was off to the races for Shehan. An early race caution slowed the pace briefly but when the race resumed a few laps later, Shehan found himself in second, directly behind his Crosslink Kiwi Motorsport teammate Bryson Morris. Holding station and exchanging fast lap after fast lap, a late race caution would bunch the field back up for one final restart. Unfortunately, that restart would not come and Shehan crossed the line in the second position and earned his career best F4 United States Championship Powered by Honda result.

With fast laps from race one setting the grid for race two, Shehan started the second race of the weekend from the outside of the front row. Looking to climb one position further up the podium from the day prior, the driver of the #66 entry fell to third on the start but immediately moved back to second by the time he exited turn two. Making several attempts to pass the leader, minor contact was made on lap three causing Shehan’s right rear tire to puncture forcing him to the pits. With lap times from race two setting the grid for race three, it was important to get back on track to go for the quickest lap possible. Responding to the quick action of his team, Shehan was able to clock the fourth quickest time and finish P19.  Most importantly, he would start the third and final race of the weekend from the outside of row two and have another chance to stand atop the podium. 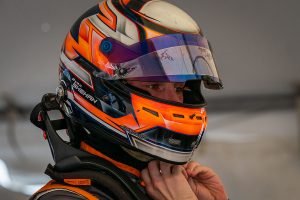 Moving into the third position early in race three, it looked as if Shehan would have a shot at the win before contact broke his front wing. With a severely damaged wing that effected both straight line speed and downforce, Shehan had his hands full to try and keep the rest of the field behind him. With all parts intact yet not operating to the optimal performance level, Ryan had a gutsy drive to end his third and final race of the weekend on the podium.

Shehan added, “I could feel something was wrong with the car and thought that the pace would start to drop off or we’d even have to retire.  A lap later, the wing was still on, and I was able to drive around the problem. I adjusted my driving to make the car work and just thought to myself that I owed my team another good result. In the end it turned out well and that is two podiums on the weekend.”

Next up for Ryan Shehan will be a trip to the New Jersey Motorsports Park for rounds ten through twelve of the F4 United States Championship Powered by Honda over the July 29-31 weekend.

Want to learn more about the Ryan Shehan Partnership Program? Click HERE
Looking to be Ryan Shehan’s Pathfinder? Click HERE
Want to help Ryan inspire and impact his youth audience? Click HERE
Don’t have access to the website? Call us at – 1.833.6.Racing (1-833-672-2464)