Since returning to the Speed Concepts Racing program, junior driver Jack Jeffers has 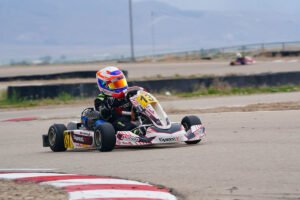 been on a tear. With podium results in the United States Pro Kart Series, Jeffers continued that momentum at the Utah Motorsports Campus for the third and fourth rounds of the Superkarts! USA (SKUSA) Pro Tour. With two more podium finishes added to his resume, Jeffers secured four top-ten results in the tough junior ranks.

“It was a good weekend for both Jack and David Ramirez,” explained Mike Speed. “With two drivers, we were able to really hone in on the driver coaching that is needed to elevate the race craft of these drivers. Jack had a great weekend of results while David had a solid debut in Mini Swift after leveling up from the Micro Swift ranks.”

Progressing through a pair of practice days, Saturday would be the home of round three of the ultra-competitive Pro Tour program. Jeffers, pulling double duty competing in both X30 Junior and KA100 Junior, was able to finish sixth and third. Sunday saw the Redspeed by OTK driver add an additional pair of top-ten results finishing ninth in X30 and second in KA100 Junior. In addition to his four top-ten results, Jeffers also secure the KA100 Junior pole position for round four by taking top honors in the morning qualifying session.

Young David Ramirez gained experience and knowledge as he moved from the Micro Swift class to the Mini Swift ranks. Leveling up in class, speed and competition, Ramirez steadily improved throughout the race weekend.

“David and his family are doing exactly what is needed to have him better his skills and race craft,” added Alex Speed, Driver Coach for the elite level karting program. “The plan is to keep putting him in the biggest events against the best drivers and have him improve. He has already increased his seat time in the first half of this season, and you can see the progress.”

With the SKUSA WInterNationals and SpringNationals now behind them, Speed Concepts Racing will now shift their focus to the annual SummerNationals at New Castle Motorsports Park. Having won numerous events at the Indiana facility in the years past, the final rounds of the Pro Tour will provide two more chances at victory before series champions are crowned at the end of the weekend.

Speed Concepts Racing has the opportunity to add a few more drivers in 2021. Please contact Mike Speed at Mike@Speed-Concepts.com.