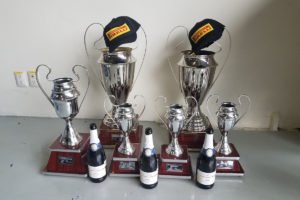 With the final event weekend of the FIA F4 NACAM program south of the border in Mexico, Texan Jak Crawford garnered two race wins and three podium results en route to Rookie of the Year honors. Dominating the two final event weekends of the season, Crawford will return to the karting ranks in just three days as he will compete at the Superkarts! USA Pro Tour at New Castle Motorsports Park just 45 minutes east of Indianapolis, Indiana.

Winning six of twenty races and amassing fourteen podium results in the twenty race starts, the 14-year-old Crawford missed winning the championship as he raced against the championship leader who was five years his elder. Battling both age, experience and learning tracks along the way, the multi-time race winner battled the same driver all year who had over two years experience in the F4 ranks around the world, including England.

While the age limit for F4 around the globe is 15, there are a few series such as France that allow younger kids to race, yet none younger than Mexico.

“Just because they let kids race as young as 13 in Mexico doesn’t mean Americans should copy what we did,” commented Tim Crawford, father of Jak. “The Mexican fans are awesome and the best racing fans in the world with crowds bigger than you will see anywhere for F4, but the family who runs Mexican F4 picked the Mexican driver they wanted to win the championship and they made it happen. This series was like the wild, wild west except it was wild, wild Mexico.”

Combined with multiple mechanical issues and a lack of straight-line speed most of the year, the championship just wasn’t meant to be for Crawford. He could have easily won twice as many races as he ended up winning due to issues beyond his control.

His main competitor was gifted with opportunity after opportunity by either Jak’s mechanical issues or questionable officiating. Taking what was given to him and holding his head high, the young talent leaves Mexico with much-needed experience, wins, podiums, and top Rookie honors.

“I am happy this series has come to a close. It was crazy at times but it was nice to be able to race and get experience before I am officially able to race F4 in the USA or Europe,” added Jak. “We will see what next year holds and where I am racing cars but I know I can make a run at more podiums and wins quickly where ever I race.”