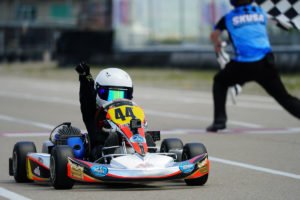 The chassis brand of choice in North American karting is continually proven to be the OTK product line based on their constant success and visits to the top step of the podium. The 2019 Superkarts! USA (SKUSA) SpringNationals at the Utah Motorsports Campus yielded similar results as OTK secured another twelve main event victories, 33 podium results and countless pole positions.

“Again, we need to thank our dealers, teams, and drivers for their hard work and continued belief in our products,” explained OTK USA’s Luis Ruibal. “We provide a high quality and race winning product, and they work tirelessly to ensure that it is at the front of the field, so thank you!”

In the Micro Swift class, it was a weekend sweep for Iron Rock Motorsports driver Jack Iliffe. Claiming the race win on Saturday, Iliffe drove his Tony Kart to the top step of the podium again on Sunday as OTK swept the top three positions in the final race day of the weekend. Graham Trammel, driving a Kosmic Kart under the Rolison Performance Group tent netted a second place finish while Supertune and Tony Kart driver Alfie Slater crossed the stripe in third. 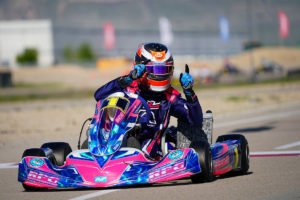 The Mini Swift division saw three different Supertune drivers on the podium over the weekend with two of them standing atop the blocks on Saturday and Sunday. Multi-time 2019 champion Kai Sorensen topped Saturday’s wheel-to-wheel action while Enzo Deligny scored the race win on Sunday. Anderson Leonard joined Sorensen on the podium on Sunday to make it a Supertune and Tony Kart 1-2 finish.

A complete podium sweep for both days of competition came from OTK drivers in the X30 Junior class. Supertune garnered their third and fourth wins of the weekend as Freddie Slater scored the victories on Saturday and Sunday. Dale Curran crossed the stripe in P2 on Saturday as he took his Racing Edge Motorsports prepared Kosmic to the podium while John Burke put Supertune on the podium again in third. Sunday would see two more OTK drivers visit the podium behind Slater as Rolison Performance Group’s Josh Pierson ended his weekend with a second place effort while Ignacio Montenegro, competing out of the Nash Motorsports program, piloted his FA Kart to a third place finish. 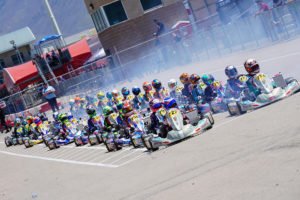 Ryan Norberg and Rolison Performance once again stole the show in X30 Senior. Norberg added another pair of national victories to his resume taking the checkers on both Saturday and Sunday, as OTK branded drivers secured five of a possible six podium results. Brandon Jarsocrak, racing for Team Felon on a Tony Kart, added a second place finish on Saturday while Ryan Perry Motorsport driver Jake Craig and Rolison Performance Group pilot Hannah Greenemeier finished second and third on Sunday.

Nine more podium results including two race wins came from the 100cc Senior and 100cc Junior divisions. A podium sweep on Saturday and Sunday in the Senior ranks saw Joshua Fine and Real Fine Racing take their Kosmic to the front while Blake Hunt and Iron Rock Motorsports’ Austin Osborne claimed the second and third positions. Local Utah resident Walker Hess claimed Sunday’s 100cc Senior victory ahead of Hunt and Fine who both visited the podium for the second time each this weekend. In the 100cc Junior class, Connor Zilisch added a pair of second place podium results for Team Felon while Diego Laroque, driving an Exprit chassis for Ruthless Karting, ended his weekend in third. 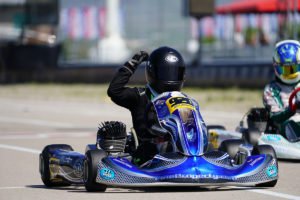 Two more OTK victories came from the X30 Masters class as Matt Johnson doubled up in his Nash Motorsports FA Kart. Taking the wins on both Saturday and Sunday, Johnson was joined on the podium by Derek Wang and his FA Kart, who claimed a third place result on Saturday and leveled up to second on Sunday.

G1 pilot Ryan Pool took his Msquared Kosmic to a pair of podium results crossing the stripe third on Saturday and second on Sunday. 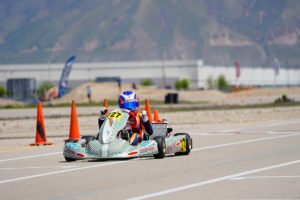 Drivers looking to purchase OTK karts or components or compete with the most popular kart brand in the world are asked to contact your local OTK Kart dealer. See how you can join the winning team!