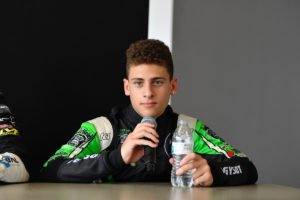 On track at the Sebring International Raceway this past weekend for the penultimate round of F4 United States Championship Powered by Honda, Alliance Racing Sponsored by Gas Monkey Energy driver Dylan Tavella scored one podium result and three top-ten finishes. In what was his most consistent race weekend of the year, the young driver scored a solid point haul and will now shift his focus to the final event at the Circuit of the Americas alongside the Formula One World Championship.

After qualifying in the ninth position for race one, Tavella and his RideWithDylan.com / Alliance Racing / Gas Monkey Energy #14 had an uneventful race moving forward one position to cross the line in the eighth position.

Race two would see the young New Yorker put on a great show as a spirited drive forward to a podium position ensued during a damp, yet drying track. With several drivers finding the conditions challenging, Tavella took it all in stride as his car slid around the bumpy Sebring Raceway as he marched his way towards the front. Closing the final lap in the third position, Tavella returned to the F4 podium.

“What a race that was,” explained Tavella following race two on the weekend. “Race one did not go as well as I would have liked, and I was determined to move forward in race two. I set a goal and with the changing conditions, committed to the aggressive approach. It was a little tricky in some of the corners but a great result in the end.”

Back to the track Sunday for race three, Tavella looked to match or better the result from his previous wheel-to-wheel action. Starting in the top-five, the Alliance Racing Sponsored by Gas Monkey Energy driver quickly moved into the second position as he looked to challenge for the lead. After a pair of cautions that slowed the field, Tavella was attacked by his fellow competitors and lost a few positions in the closing stages of the event. 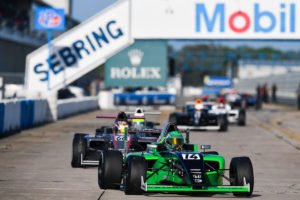 Tavella added, “It was difficult to keep everyone behind me. We definitely lost some of the speed we had yesterday, but it was a triple point-scoring weekend nonetheless. On to the Circuit of the Americas now and the final event of 2019.”

Dylan Tavella would like to thank his current marketing partners and team for their continued support. A huge thanks to Alliance Racing, Gas Monkey Energy, Bell Helmets and K1 Racegear. Additionally, Tavella sends an extra special thank you to all the donors that have participated in the Ride With Dylan program as he looks forward to continuing this for the remainder of the year and onwards into 2020 with all proceeds going to the Leukemia and Lymphoma Society.