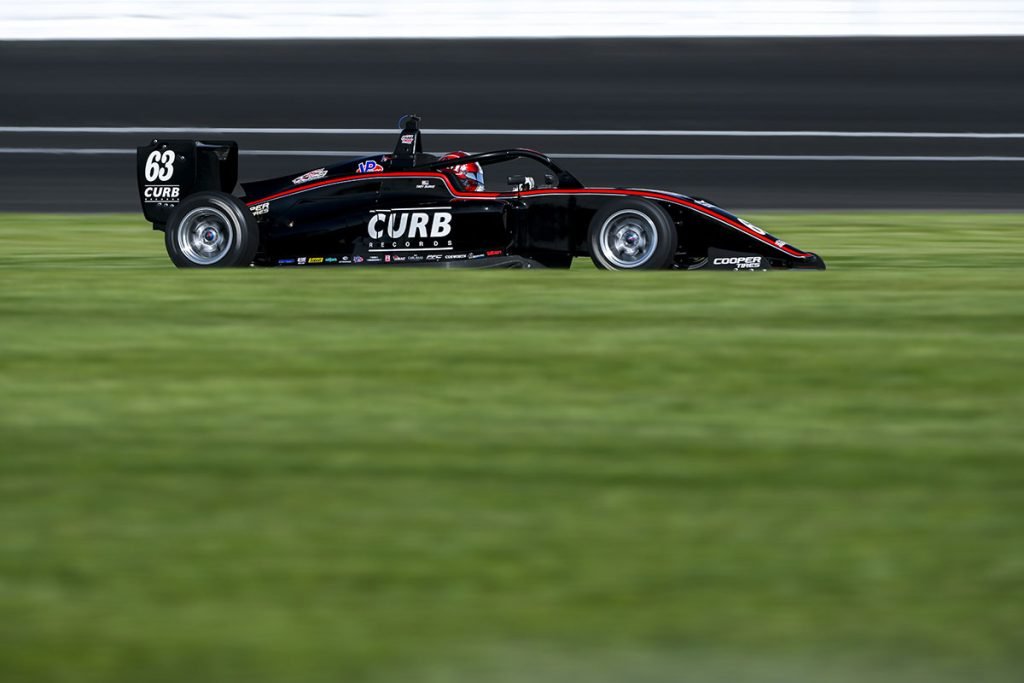 Taking it to the Brickyard this past weekend, Joe Dooling Autosports – Curb/Agajanian was ready to run laps on the most famous track in the world, the Indianapolis Motor Speedway (IMS). With a test at the 14-turn IMS road course back in October of 2021, Trey Burke was ready to battle in the USF2000 Championship Presented by Cooper Tires first triple header of the season.

The team’s Thursday testing sessions revealed that Trey Burke was here to race this weekend as he managed to turn some pretty fast laps on the Indianapolis road course, landing in the top-ten as both testing sessions came to a close. With temperatures rising and a hot track for the afternoon practice, it was a difficult session for many as drivers came to grips with a greasy racing surface as they prepared for what could be the race conditions over the weekend.

After qualifying and race one, the Joe Dooling Autosports program went to work to make the necessary changes to Trey’s USF2000 machine to help him climb the running order. After qualifying 16th, he would be starting the first wheel-to-wheel action from the outside of row eight and look to take advantage of the long run down to the first corner.

“Race one went better than we expected,” explained Trey Burke. “We kept our nose clean all race, and made solid moves when the opportunity came, giving us solid points. I love racing here at IMS and the long straight allows for big drafts. If we can keep the nose clean, we can move forward in the remaining two races this weekend.”

And move forward he did! Taking the green flag in sixteenth and gaining positions early and often, Burke was also a benefactor of a few on track incidents that allowed him to gain a position or two. Showing the pace that he had in testing and driving like a seasoned veteran, Burke was able to level up, claiming his spot in the top-ten by the time the checkered flag flew.

An unfortunate incident ended his second race of the day early, just two laps shy of the checkered flag on Saturday morning. With little time between race two and three, the team went to work to build a car to get Burke back on track for the final race of the weekend. Rolling to the grid and not knowing what they had, Burke pushed hard to work his way forward to cross the line in twelfth, an amazing feat for driver and team after a wrecked race car hours earlier.

Burke added, “Race two wasn’t as good. We had moved up a few spots from our original starting position, but with two laps to go, another driver ran out of talent punting me straight off the track. Very unfortunate. Race three was like race one as we kept our nose clean and stayed out of trouble to cross the line in a solid P12. An amazing effort by the team and I can’t thank them enough. Overall, the weekend went well, the team and I can’t wait for our first and only oval race of the year coming up next.”