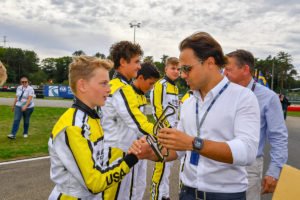 Traveling to Genk, Belgium for the third and final round in the CIK / FIA Karting Academy Trophy, American pilot Colin Queen had his best international event of the season. Completing each and every race lap and transferring directly to Sunday’s main event, Queen was one of the biggest movers over the event, passing a total of twenty-five karts, and went on to score his first international points of the season at a tough and challenging race circuit.

“Friday was a very difficult and trying day,” explained Queen. “In the first practice session in wet conditions, I was only able to complete four laps as I was collected in an incident with a fellow driver. This forced me to shift my focus for the day as I would be a session behind my competitors and needed to do everything possible to catch up.”

Progressing through the rest of the practice sessions, Queen found the speed needed to once again be in the top-ten as he closed the third and final run with the eighth quickest lap time.

Queen continued, “Qualifying did not go as I was expecting and it put me in a tough position for my heat races. I ended up 17th in my group and 33rd overall which was disappointing after the pace I showed in practice, but the racing action was up next.”

With two heats set for Saturday, Queen started P17 and inside row nine in both. Looking to stay out of trouble and advance his way up the running order, the young American progressed nicely to score a 13th place result in the first wheel-to-wheel action. Heat two was even better and after an aborted start during the first attempt, Queen attacked when the green flag flew. Starting 17th again, the talented driver gained four positions in the opening corner and another on the first lap. Head down and driving with consistent race laps, Queen advanced up the grid another three positions and after a post race penalty by a fellow competitor, ended his second heat with a ninth place result.

Queen added, “Heat two was exactly what I need for my confidence and I was really excited to head into Sunday’s racing action.”

Another stellar start in heat three on Sunday morning advanced Queen four positions forward in the opening lap and another handful throughout the race to score his second top-ten heat race result of the weekend. With points calculated and the grid set for the main event, the Tony Kart driver transferred directly into the final and would line up in the 18th position.

With 19 laps to make up as many positions as possible, Queen laid it all on the line in the final. Gaining and losing positions as the ebb and flow of the main event went on, the Californian not only transferred directly to the main event earlier that day, but went on to score his first championship points of the season with a solid 14th place finish at a track that he had never seen until the start of the race week.