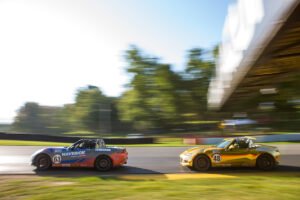 Continuing to evolve and elevate their newly founded program, Maverick Racing turned heads at their most recent event weekend at the Mid-Ohio Sports Car Course this past weekend. Competing at the Lexington, Ohio facility with drivers Justin Piscitell and Bryan Hixon, Maverick added a top-five result in the highly competitive Battery Tender Global MX-5 Cup Presented by BF Goodrich Tires.

After qualifying in the seventh and fourteenth positions, Piscitell and Hixon would start in row four and row seven for the first wheel-to-wheel action of the weekend. With the top-ten qualifiers separated by less than half a second, competition would be tough as the duo looked to climb the running order and the eventual results sheet. With fast and consistent lap times and some close hard racing, the #63 car of Hixon finished eleventh while the #9 entry of Piscitell was classified in 13th.

“I’ve coached in this paddock for years and ran the Mazda NC chassis. This new ND-1 chassis with the 2020 Sadev 6-speed sequential gearbox has been so fun to drive,” expressed Piscitell. “I was impressed with how tight the field was and the Maverick crew has certainly put in the work being that we qualified 0.24 of a second from pole position putting us P7 in race one.”

With lap times from race one setting the grid for race two, it was tenth and fourteenth place starting positions for the Maverick duo as they both had their best runs of the weekend garnering their best results of the season in race two. Piscitell carried the team’s best result with an impressive fifth place finish despite competing with the relatively new program in only their third event together. Hixon had his best result of the season finishing eleventh.

“Back-to-back weekends allowed us the opportunity to narrow the gap and really work on overall setup,” added Hixon. “Proven in both races, I’m very pleased with the team’s efforts and I had my best competitive racing to date this season. I’m hugely proud of our crew and couldn’t be happier finishing in the top-five and top-ten of this extremely competitive championship.”

“The entire Maverick program is building momentum and I am confident that with a few more events, or even sooner, we will be challenging for podiums and race wins,” explained Team Manager and former W Series competitor Shea Holbrook. “The Global MX-5 Cup program is ultra-competitive and our progress from the start of the season until now shows the strength of our overall program. Can’t wait until the next one.”

With only two weeks until their next event, Maverick will travel to the New Jersey Motorsports Park in Millville, New Jersey over the October 9-11 weekend. Looking to build on their most recent success, the team will shift their goals and aim to achieve them as the series crosses the halfway point.

For more information on Maverick, please contact Shea Holbrook via email to Shea@SheaRacing.com.