TOP-FIVE FOR JM CORREA IN OSCHERSLEBEN

It is a busy two weeks for American driver JM Correa as he competes in two different series in two different countries, crisscrossing his way through Europe. Last weekend, showing well at the ADAC German F4 event at the Motorsports Arena Oschersleben, in Oschersleben, Germany, Correa and his Prema Team travel to the Mugello Circuit in Borgo San Lorenzo, Italy for the F4 Italian Championship powered by Abrath this weekend. 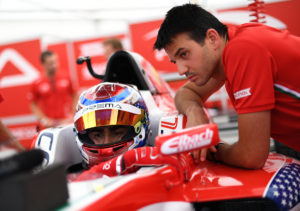 Qualifying in the ninth position for race one on the weekend, a small error by Correa in wheel-to-wheel competition cost him any chance of a good result. Race two allowed the American driver to show his speed as he turned his sixth place starting position into a solid fourth place finish when the checkered flag flew. Hounding the lead trio until the end, Correa narrowly missed the final step of the podium by a scant three tenths of a second. Race three would end with a 17th place result after starting 19th.

“We made a technical change in qualifying which didn’t work out, so we knew the whole weekend was a bit compromised due to the difficulty to pass on this track,” explained Correa. “In race one I made a mistake which cost me the race and the starting position for race three. So once again we only collected points in race two. A very frustrating weekend.”

Shifting gears this weekend and with no time off, Correa is already en route to Italy where he will compete at the famed Mugello Circuit. With 15 corners and a length of over five kilometers, Correa will look to get back to his winning ways. As a race winner in the F4 program in 2016 and podiums attained in 2017, the American driver has set some major goals for the upcoming weekend.

“I think it is important to qualify well and finish all three races with no issues,” explained the Prema Team driver. “If we can do that, everything will fall into place and the results will speak for themselves.”

With on track action set to take place on Friday, July 14th with both free practice and qualifying, race one and two will commence Saturday, July 15th. The third and final race of the weekend will take place on Sunday, July 16th.