The Team BENIK USF2000 program debuted this past weekend at the second event weekend of the Cooper Tires USF2000 Powered by Mazda Championship and faired well with fifth and eleventh place finishes. With one driver having never driven the car before and both drivers never seeing or driving the Barber Motorsports Park facility in the past, Team BENIK was satisfied with the results and will now shift their focus to the Grand Prix of Indy weekend in May. 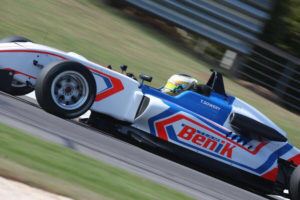 “This was our first series event and we entered with no expectations,” explained Nick Mitchell, Co-Founder of Team BENIK. “We had a pair of drivers that had never driven the circuit before and one that had never even driven the USF-17 car, so our expectations were to gain as much knowledge and experience as possible. To finish race two in the front half of the field exceeded our goal and we look forward to Indianapolis.”

After taking part in the Promoters Test Day on Thursday morning, Team BENIK got down to business on Friday with qualifying and race three of the Cooper Tires USF2000 Powered by Mazda. With both Toby Sowery and Darren Keane learning with each passing lap, the goal of improving to put the best result possible for Saturday’s race two was the plan, and the duo did just that.

Friday’s race finishes turned into better qualifying results on Saturday and the progression continued in the second race of the weekend with Sowery claiming a top-five result in fifth after starting in 11th. Darren Keane drove forward from his 19th place starting position to end his weekend in 11th, narrowly missing the top-ten. With the constant improvement, the completion of every race lap and having both drivers in the front half of the field, Team BENIK’s goal for the weekend was satisfied. 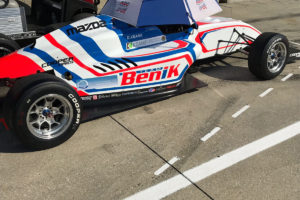 “Darren was running inside the top-ten for the majority of Saturday’s race before losing a spot in the closing stages,” added Ben Cruttenden, Co-Owner of Team BENIK. “After very little testing due to an injury, Darren arrived in Barber and improved each and every session. It was great to see him continue to come to grips with the USF2000 and decrease his lap times.”

Mitchell continued, “Things are looking really good for us in the future. We are learning the ins and outs of the series, the cars and the whole process of event weekends, as it is very much different than our karting program. We are already hard at work for rounds five and six at the Indianapolis Motor Speedway in May with a driver lineup that will soon be announced.”

For more information on Team BENIK and BENIK Kart, please contact Nick Mitchell or Ben Cruttenden via e-mail to Info@Benik-Kart.com or by phone at 754.206.4870.