TOBY SOWERY AND DAVID MALUKAS LOOK TO BRING HMD MOTORSPORTS TO THE TOP IN ST. LOUIS 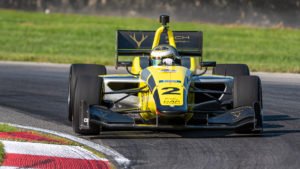 For the final oval event of the 2019 season, HMD Motorsports is headed to World Wide Technology Raceway at Gateway this weekend, August 22-24. Located just east of St. Louis, Missouri in Madison, Illinois, the recently revamped team will take on the 1.25-mile oval with drivers David Malukas and Toby Sowery in the Indy Lights Presented by Cooper Tires Championship.

“We have had some changes within the team including a rebrand to HMD Motorsports as well as the addition of several key people,” explained Team Manager John Cummiskey, who is operating the team out of his Brownsburg, Indiana based shop. “Geoff Fickling has taken on the role of Lead Engineer and my crew and I have been able to overhaul both Indy Lights machines. We have added full-time staff to the program but it has all been in a very positive direction. There was a lot of work to be done but to finish the test last Thursday first and second on the speed charts was well worth the sweat and long hours.”

“The boys did a great job behind the wheel, and we were able to try a lot of items on our test list,” explained Fickling. “We wanted to ensure that both Toby and David were comfortable in the car, but also stress that there is only one short practice before qualifying this coming weekend, so getting on with the test program and finding speed was key. With so many new people in new roles, it was nice to end the day on top and see the team gel as much as they did. There is still a lot of work to be done, but we are working to make HMD Motorsports a race winner in 2019 and a championship contender in 2020.”

HMD Motorsports was able to participate in a scheduled series test at WWT Raceway where both drivers quickly worked their way up the timing charts. During the first test of the day, Sowery and Malukas took time to find speed and ended the sessions in the fourth and fifth positions. However, as the duo became more comfortable and improvements were made on both cars, both drivers were able to jump to the second and third positions during the second session. By the end of the day, Sowery was able to post the fastest time of the day with Malukas tailing right behind him in the second position.

“The Freedom 100 at Indianapolis Motor Speedway was a bad event for me, and having not been on an oval since my crash, I was definitely nervous coming here,” Malukas stated. “I feel very fortunate that we had the chance to test, and I could work out my nerves before heading into the race weekend. Now I am confident in my ability and am eager to get the weekend started and see what we can accomplish.”

After a series of changes within the team, both drivers have been able to steadily improve in recent event weekends and, based on testing, the improvements are continuing and both drivers are looking for podium finishes this upcoming weekend. The past two event weekends, Sowery has finished on the second step of the podium and is ready for his first win.

“We had a strong day at the test last week and the team has put a lot of hours into getting on top of the issues we had earlier in the season,” Sowery said. “I feel that the pace is a reflection of the effort everyone has put in, and I just hope we can repay them with a win. We were fast, I want to go fast and I want to win.”

Kicking off the weekend, both HMD Motorsports drivers will be participating in an autograph session on Thursday evening at Ballpark Village as part of Fan Fest before focusing in on the weekend. With limited track time, both drivers will hit the track for one 45-minute practice session on Thursday before heading into qualifying later that evening. The green flag will wave for round 14 of the championship on Saturday afternoon prior to the NTT IndyCar series main event.