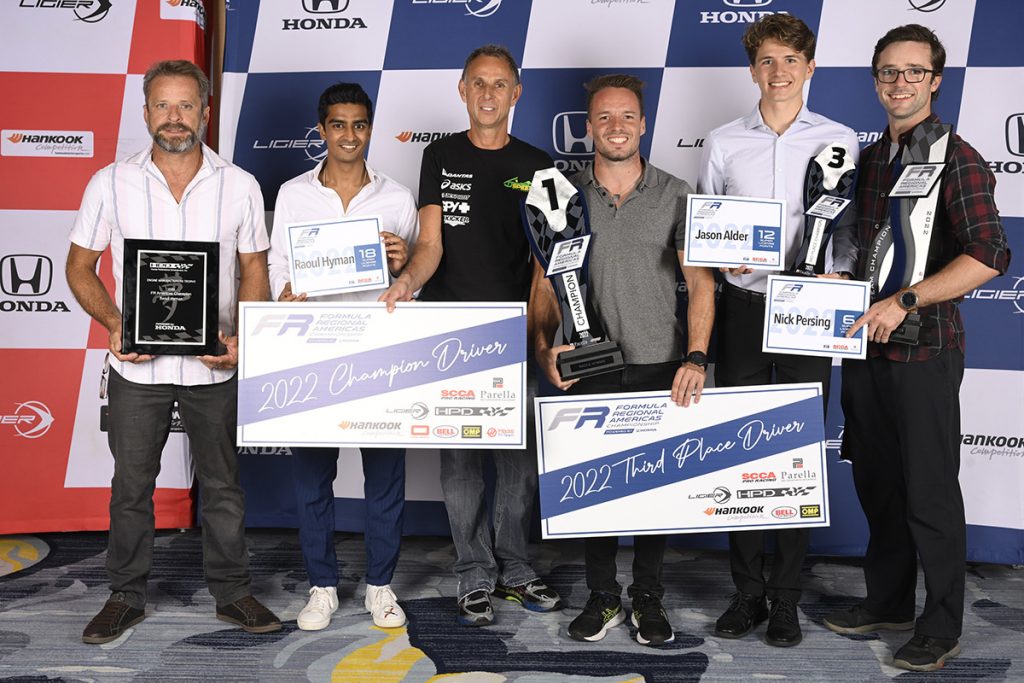 As the 2021 Team and Driver Champions in the FR Americas Powered by Honda in 2021, TJ Speed repeated that performance again in 2022. Earning both titles again this past weekend at the Circuit of the Americas in Austin, Texas, Raoul Hyman was named the FR Americas Champion while TJ Speed once again earned the Team Championship honors.

“What a great year,” expressed Tim Neff. “I did not think anything could top the 2021 season we had but 2022 did just that. I can’t thank my crew, the drivers, and everyone involved enough. Congrats to Raoul on being named the FR Americas Champion and every single person for assisting in achieving our goals of another team title.”

With the championship on the line, Raoul Hyman needed only five laps in qualifying to earn another FR Americas Championship Powered by Honda pole position. Strengthening his position and desire to win, Hyman was more than a second clear of his closest competitor in the one and only qualifying session on the weekend. Nick Persing put a pair of TJ Speed drivers in the top-five as he slid into the fifth position and would line up on the grid for race one directly ahead of teammate Jason Alder, who had an uncharacteristic qualifying session that saw him back in seventh.

Converting his pole position into a win and maximum points in race one, Raoul Hyman took the victory by nearly ten seconds and secured the 2022 FR Americas Championship. It was another race that featured a pair of TJ Speed drivers on the podium as Nick Persing jumped to third in the running order while Jason Alder salvaged a sixth-place finish. In the end, it was enough points to secure the Driver Championship for Raoul as well as the Team Championship for TJ Speed. Following the race, Persing was hit with an avoidable contact penalty that stripped him from his podium result and dropped him to sixth in the results while Alder was promoted to fifth.

It was TJ Speed back on the top step of the podium for race two, as this time Jason Alder reigned supreme as Hyman fell victim to a suspension issue on track that forced him into the gravel trap. Alder scored the win by more than three seconds, adding to his season total and providing a one-two finish for TJ Speed. Nick Persing was the back end of that double podium result crossing the line second, a strong showing for the pair in the penultimate round of the season.

Raoul Hyman capped off his championship-winning season with another win as he book-ended the season with victories. It was Persing who put two TJ Speed drivers in the top-five with a fourth-place finish while Jason Alder put three in the top-six dominating the race, just like they had dominated the season. With the results finally official, Hyman earned the title while TJ Speed earned their second consecutive Team Championship. Additionally, Alder ended his 2022 campaign third in the points while Persing was fifth in the championship point battle.