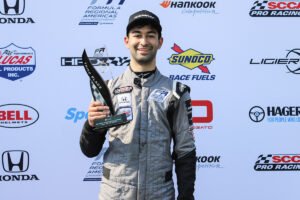 It was podium filled weekend for TJ Speed at the Brainerd International Raceway. Leading both the Team and Driver Championship points battles coming into the weekend, Kyffin Simpson added three podium results while Varun Choksey and Baptiste Berthelot both stood on the podium once. Logan Cusson ran in the top-three on occasion and solidified the team’s dominance with a fifth-place result in race three on the weekend.

With eleven FR Americas drivers competing this weekend, TJ Speed put a pair of their drivers in the top-six after qualifying with championship point leader Kyffin Simpson in fifth and Varun Choksey in sixth. Canadian Logan Cusson put his #99 entry in the eighth position after overcoming a loss of power in practice as Baptiste Berthelot was tenth and would line up outside row five for the first race of the weekend.

Unlike the F4 Championship competitors, the FR drivers would only have only one race on Saturday as three of the four TJ Speed drivers managed to advance their positions. Simpson drove forward from his fifth place starting spot to stand on the podium in second and extend his point lead as Berthelot drove from tenth to fifth, earning his career best result in FR Americas competition and his first top-five of 2021. Varun Choksey remained his consistent self with a sixth-place finish while Cusson, who battled for a podium result for the first seventy-five percent of the race, fell victim to an electrical gremlin that reared its ugly head and forced him to the sidelines and eventually a tenth place on the results sheet. 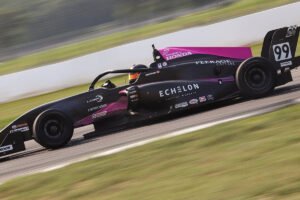 It was a spectacular race two for TJ Speed drivers as the Indiana based program put two drivers on the podium, three in the top-five and four in the top-seven to extend their Team Championship point lead. Kyffin Simpson led the team and earned his second podium result of the weekend with a second-place finish as Varun Choksey scored his third podium of the season with a third-place result. Logan Cusson ran as high as third and looked to challenge for a podium result until the latter stages of the race but managed to cross the line in fifth. Baptiste Berthelot secured his best result of the season in the first race of the weekend and backed it up with a seventh-place result in race two.

Race three would provide championship point leader Kyffin Simpson with his third podium result of the weekend as a second-place run, added to his two second place finishes earlier in the weekend, helped him to maintain his overall point lead. With two event weekends remaining, Simpson will look to return to the top step of the podium, a place that he has visited five times throughout the 2021 season. With Simpson leading the quartet, three TJ Speed drivers claimed top-five results with Baptiste Berthelot resetting his career best result and his first podium of the 2021 season finishing third. Logan Cusson hung on for a fifth-place result while Varun Choksey maintained TJ Speed’s incredible performance with four drivers in the top-six finishing sixth. Following the race, the fourth-place driver was issued a time penalty for his actions on track and as a result, Cusson was moved from his fifth-place finish to fourth putting three TJ Speed drivers in the top-four. 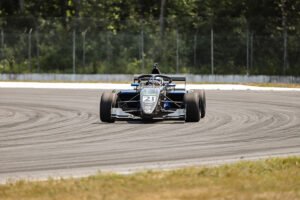 “Great weekend for our program and excited that now all four of our drivers have podium results this season,” expressed TJ Speed. “We work hard for all of our drivers and that is shown by the success that each has had at some point this season. We are already looking forward to the next one.”