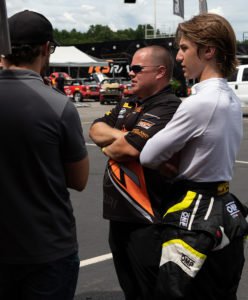 Claiming the race win at the annual SCCA June Sprints one month ago in his Hyundai debut, Luke Lange made his TC America TCA series debut this past weekend at the Virginia International Raceway (VIR). Scoring three top-ten results including a fifth-place finish during the second race of the weekend, Lange gained experience needed that will help him challenge for race wins and podium results later this season.

“It was a good, but long week of racing,” explained Lange. “I experienced a lot of firsts in car racing including being quickest in one session as well as having an off that damaged the race car on Thursday. I started on the inside and the outside, so it was a lot of new things for me. All-in-all it was a good first event with the highlight being my fifth-place result on Saturday. The competition in the TCA class is tough but is great for building my experience for the future.”

After qualifying fifth on Friday morning, Lange entered his first career TCA race from the inside of row three. A slight off early in the race relegated the rookie to the tail of the field as he battled back to secure an eighth-place finish all while turning the fourth fastest lap of the race.

With times from race one setting the grid for race two, Lange would look to challenge for a podium result after taking the green from the outside of row two. Battling hard throughout the race and with the event finishing under yellow, the young Texan scored his first career top-five result in only his second start of the season.

Lange added, “One of my goals this weekend was to start and finish in the top-five, and we accomplished that on Saturday. A huge thanks to Copeland Motorsports, Hyundai and all my partners for the support as I make the transition from karts to cars.”

With one more wheel-to-wheel event on Sunday morning, Lange once again started from the outside of row two. Racing hard and looking to move forward at the end of the race, another late race caution forced the race to end under yellow as Lange crossed the stripe in sixth, his third top-ten of the weekend. 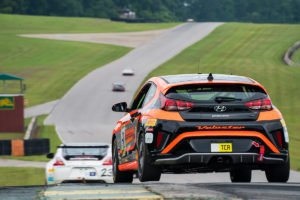 With less than one month until the next event, Luke Lange and his Copeland Motorsports team will head west to Sonoma Raceway in Napa, California over the August 7-9th weekend.

Luke Lange would like to thank his partners for their continued support. A huge thanks to Copeland Motorsports, Hyundai USA, Bryan Herta Autosport, LukesFastBreaks.org, America’s Auto Auction, Progressive Powersports, Strategic Dealer Services, Speed Concepts Racing as well as the Gonzalez family for all of their help, support and guidance.

For more information on Luke Lange, please visit him online at www.LukeLangeRacing.com or www.LukesFastBreaks.org or contact RTD Media & Management via email to Info@RaceTechDevelopment.com.