THREE PODIUMS IN THE LAST FOUR RACES FOR PARKER CHASE

After a pair of podium results two weeks ago in his home state of Texas, Performance Motorsports Group driver and 16-year-old Parker Chase would travel to California for the final round of the Pirelli World Challenge GTS program. Competing at the famed Sonoma Raceway in the heart of Wine Country, the Enertech Resources / Protein Water by ProBalance / New Braunfels Convention and Visitors Bureau backed Ginetta G55 continued the podium streak with a solid third place finish on Saturday and set the fastest lap of the event on Sunday. 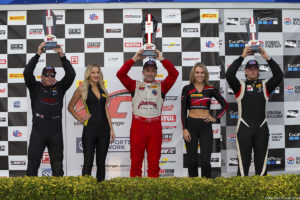 After pacing the field in the second of two practice sessions on Friday, Ginetta G55 driver Parker Chase was ready to attack for the pole position during Saturday morning’s qualifying session. Showing speed early and turning the fastest lap of the session during the opening five minutes, the Performance Motorsports Group driver took the early provisional pole. As the session wore on and drivers continued to turn quick laps, Chase would slowly fall down to the fifth position. Regaining his speed and looking to put down another flying lap, the first sector was stout before a slower driver would heed any progress. Ending his session early, Chase would settle for the fifth fastest lap of the session and would line up inside row three for race one that afternoon.

“Qualifying was not ideal for us,” explained Chase. “We showed great speed early but my progress was hindered a little later in the session due to a slower driver. Two weeks ago I came from 23rd to finish second so today I am hoping to come from fifth to take the win later this afternoon.”

Starting inside row three in P5 for race one, Parker drove like a seasoned veteran as he advanced forward to a third place podium result. Battling hard with fellow competitors, Chase made some bold, yet calculated moves, to secure his third podium result in the past three races.

“I feel we could have been at least second and maybe even won if I was able to get by some of the drivers a little quicker,” explained The Ginetta G55 driver. “I had a fierce battle with the GTS champion that went on for several laps and I lost touch with the leaders. In the end, I was able to make the move to finish third and stand on the podium for the third race in a row.” 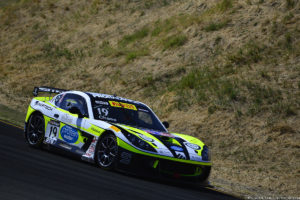 With the lap times from race one setting the grid for race two, Parker would start outside row two in the fourth position for Sunday’s wheel-to-wheel battle. Holding his position through the opening laps, the race would be slowed due to a yellow for contact. Taking the restart with twenty minutes remaining, Chase would immediately go on the offensive and try to get into a podium position. With a move that looked to be nearly complete for the third position, the third place driver would make an attempt to close the door and made contact with Chase’s Ginetta G55. With both drivers going off track, the Texan would fall to 12th before driving forward to finish in the eighth position with the race being red flagged short of the full race distance.

“The result was definitely not what we had hoped for,” added Chase. “On the bright side of the day, we did manage to turn the fastest lap of today’s event showing that the Ginetta car will be a threat for the championship in 2018.”

Parker Chase, Chase Racing and Performance Motorsports Group would like to thank their supporters. A huge thank you to Ginetta Cars for providing top notch equipment and also to the Pirelli World Challenge for providing a series to showcase the cars and drivers. Parker Chase would also like to thank Protein Water by ProBalance and New Braunfels Convention and Visitors Bureau as well as the City of New Braunfels.