THREE PODIUMS FOR BN RACING AT THE GRAND PRIX OF ST. PETERSBURG 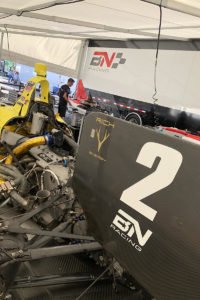 One year ago BN Racing made their debut in the Indy Pro 2000 category with a podium result. Fast forward one year to the opening round of the 2019 Road to Indy series at the Grand Prix of St. Petersburg, and the Chicago, Illinois based team, now with a brand new Indy Lights team, repeated the feat with a debut podium in the highest rung of the ‘Road to Indy.’

Not only that, during the first weekend of competition the team came away with three podium results, six top-five finishes, eight top tens and leaves the first event weekend as the Team Championship leaders in the 2019 Indy Lights Presented by Cooper Tires Championship and impressively have now scored podium finishes in all three rungs of the Road to Indy series in less than two years.

“What a weekend!” exclaimed Bryn Nuttall of BN Racing. “We had a lot of things come together last minute but we were able to pull off an incredible weekend. All four of our drivers finished in the top-ten in their respective classes, and to leave the first event with three podium results is a great reward for all the hard work that my guys have put in over the winter period.”

Leading the way for BN Racing was British driver Toby Sowery. Joining the team for only one test day, the final series test at the Homestead-Miami Speedway earlier in the week, Sowery took the field by storm in St. Petersburg claiming a pair of podium results. Turning his second place qualifying effort into a podium effort on Saturday, the Brit drove forward in Sunday’s race two to finish third. 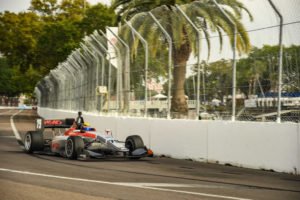 American standout David Malukas and multi-time Indy Pro 2000 race winner in 2018 enjoyed a solid debut weekend in the Indy Lights program. Showing consistency throughout the weekend, Malukas paced with Sowery and others who have years more experience to garner a pair of fourth place finishes.

Nuttall continued, “I wasn’t sure what to expect for our first event. There are several teams that have IndyCar programs and they have many more resources than we currently do, but we were able to show again what we have in the past. David and Toby both did an amazing job as did everyone else involved in us getting this far so quickly.”

Indiana resident Zach Holden added another pair of top-five finishes to the BN Racing resume including a podium result on Saturday in the in the Cooper Tires USF2000 Championship. After battling at the pointy end of the field all weekend, Holden secured a fifth place finish in Race 1 and leveled up Sunday to stand on the third step of the podium in Race 2. Having not been in a racecar in six months, Holden has renewed focus and energy to get back in the seat at the next event at the Grand Prix of Indianapolis.

Anthony Famularo, a rookie in the Cooper Tires USF2000 Championship, performed great throughout the weekend. Having never competed on a street circuit in the past, Famularo kept his BN Racing ride out of trouble and closed the event with a pair of top-ten results. Gaining speed with each passing on track session, the Floridian driver became more comfortable behind the wheel and will look to continue gaining speed and experience throughout 2019. 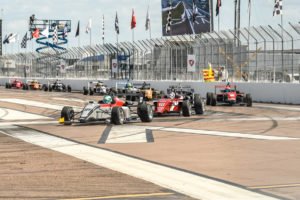 Nuttall added, “Both Zach and Anthony did a great job over the weekend from the one and only practice session through to the end of the race two. Both drivers are great assets to the program. With a little more seat time, Zach and Anthony will have the opportunity to win races in 2019.”

Leaving the first event weekend of the year, Toby Sowery and David Malukas sit third and fourth in the IndyLights Presented by Cooper Tire Championship Point Standings while Zach Holden and Anthony Famularo have positioned themselves fourth and tenth in the Cooper Tires USF2000 Championship title chase.