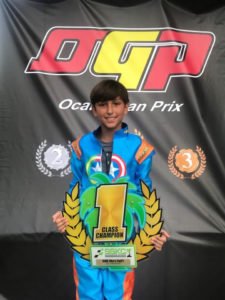 With a hurricane looming off the coast of Florida, it was back to the Ocala Gran Prix facility in Ocala, Florida this past weekend for the final round of the Sunshine State Karting Challenge (SSKC). When the final checkered flags had flown, Team BENIK claimed three podium results, one win, four top-five finishes, three fastest lap honors and a championship to close out the series’ inaugural season.

“The series officials did a great job getting both races in with the hurricane looming,” explained Nick Mitchell. “Moving Sunday’s main event to Saturday allowed all of us to get home to our families and loved ones. While we would have loved to have more laps and more wheel-to-wheel action, the SSKC staff did what they had to do, and I personally commend them for their hard work and quick decision making.”

Leading the way on the results sheet for Team BENIK was Mini Swift driver Michael Costello. After qualifying fourth and finishing eighth in the prefinal, Costello drove like a season veteran in the first of two finals to cross the stripe in the second position. Aiming a spot higher for final two, Costello grabbed the main event victory to end the SSKC season as well as the fastest lap of the race in both main events.

Emmo Fittipaldi provided a third podium result for Team BENIK in the X30 Junior class improving from his seventh place qualifying effort throughout the day. Finishing third in the prefinal, Fittipaldi maintained his position for the main event and celebrated on the podium later that afternoon. In the second of two finals on the day, the second-generation driver finished fifth, but just like Costello, secured the fastest lap of the main event.

Mitchell added, “The summer karting season is all but over, and it is now time for us to shift our focus to some of the biggest events of the year. We will have a large and strong team at the ROK Cup USA ROK the RIO event as well as the Superkarts! USA SuperNationals. We will be offering tent and transport as well as arrive and drive and support to all of our customers. Our goal is to win, and I hope that you will join us.”

Team BENIK also would like to congratulate Enzo Vidmontiene on his Sunshine State Karting Challenge Championship in the IAME Micro Swift division.

With the ROK Cup USA ROK the RIO and the Superkarts! USA SuperNationals on the horizon, Team BENIK has opportunity for arrive and drive programs that fit your needs, as well as new and used chassis sales. For more information on the BENIK Kart, or Team BENIK program, please contact Nick Mitchell via e-mail to Info@Benik-Kart.com or by phone at 561.348.4406.