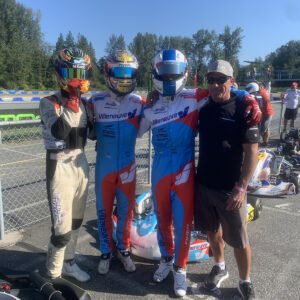 The RaceLab / KartPlex team, launched earlier this year, is having an amazing debut season in the Canadian karting arena and just had a fantastic national debut at the Canadian Rotax Finals. Honing their skills on the local and regional level for the first half of the season, RaceLab / KartPlex took their all-new Jacques Villeneuve (JV) Kart to the national scene for an epic debut weekend.

In the Micro Max class, RaceLab’s Luca Popescu piloted the new JV Cadet chassis. Doing a fantastic job and running as high as sixth in the prefinal, Popescu was unfortunately involved in an incident late in the race which resulted in him having to start the main event from the tail of the field. Returning to the track on Sunday, Luca drove to a top-ten result to finish tenth.

The Mini Max class would see Ty Fisher compete aboard his RaceLab JV Kart and had a very competitive weekend. Ty finished third in all three heat races before running second in the prefinal before a late race spin. Similar to his Micro Max teammate, Ty had to start the main event from the back of the field but did an amazing job working his way through the competition to earn himself a solid fifth-place result.

In the Junior Max class, the RaceLab team was supporting Jamel Abougoush aboard a JV Kart and Devon Radosevic who piloted an Atomica chassis. In the heat races, Jamel had a pair of fourth place finishes while Devon finished as high as sixth. During Sunday’s main event, Abougoush narrowly missed the podium, finishing in the fourth position, while Radosevic added another top-ten result for the team finishing ninth.

In the highly competitive Senior Max class, RaceLab supported driver Zach Claman DeMelo was joined by Josh Finer and Marco Kacic aboard the JV Kart line of products. The RaceLab team was very pleased to have all three drivers consistently in the top-seven in the 21-kart field throughout most of the practice sessions. Qualifying saw DeMelo put his JV kart on the pole position while Kacic and Finer suffered some technical issues which set them back a little further than anticipated, qualifying seventh and 15th respectively. All three competitors had their ups and downs in the Saturday heat races with DeMelo maintaining his pole position starting spot for the main event while Kacic and Finer would see their main event begin from a top-ten starting position.

DeMelo and Kacic both had strong starts for Sunday’s final and were running inside the top-five when the green flag flew while Finer’s race came to an end at the start of lap three when he was collected in an on track incident. Less than one lap later, DeMelo suffered a mechanical failure while running in P3 negating any chance of the race win or podium result which he was nearly guaranteed.

“It was really unfortunate but sometimes these things happen,” explained DeMelo. “It’s disappointing because I feel that I had the pace to win. I was just being patient because I knew that my set up would come in strong in the last half of the race. I strongly feel that this was my race to lose and unfortunately a mechanical issue took us out. Besides that, the RaceLab program and JV Kart had a great debut showing speed and consistency in a variety of different classes. The future is bright!”

Marco Kacic was able to work his way up to P3 and earned the third step on the podium setting the fastest lap of the race. Showing great pace and taking huge chunks of time out of the leader’s lead, Kacic ran out of time to be able to mount a challenge for the race win. 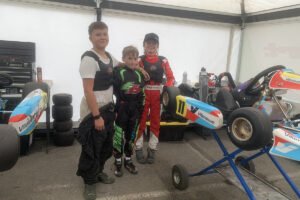 “I really feel for my teammates,” added Kacic. “Josh had the speed to run with us up front but just didn’t have any luck. Zach was the man to beat all weekend and it is unfortunate that something out of his control ended his potentially winning run. I’m super happy with my performance this weekend. I haven’t been in a kart in a long time and the only reason I was able to get up to speed so quickly was because of my team. The JV Kart was amazing and my motor from Black Racing Engines performed flawlessly, but it was the RaceLab team that truly made the difference. Having such awesome teammates, coaches, and staff truly was the key to all of us under the tent running so strong this weekend.”

The RaceLab team has plans to compete in several local and regional series in Western Canada this summer as they prepare to make a serious run for victory at the Superkarts! USA (SKUSA) SuperNationals, in Las Vegas Nevada and the 2021 ROK Cup USA ROK Vegas event, assuming that circumstances and restrictions related to the COVID pandemic will allow it to happen.