The second race of the year for the Texas Sprint Racing Series (TSRS) presented by TYCA Karting & EVINCO Tires was held on May 20 & 21 at North Texas Karters in Denton, Texas. The event proved the series continued growth from 2016 and race one with a record number of 78 entries in both the two-stroke and four-stroke classes for this second event of the year. TSRS had a stellar LO206 field once again, along with the World Formula Pro, TaGs and Shifters, all providing very close and exciting racing around the challenging .5-mile layout.

Briggs – World Formula Pro Light presented by Ribtect
The World Formula Pro Light class sponsored by Ribtect provided some great racing with close battles throughout the weekend. Brendan Baker (CRG Nordam/Core Karting/Rpm RaceKarts) scored the pole in qualifying and took his second overall victory on the new CRG FS4 chassis. Baker had close battles with Jerry Rhodes (Rpm RaceKarts/ Margay) and returning 2016 WF Champion Shawn Ross (Eagle Kart) in heat two, but Baker had trouble in heat one and three. Rhodes would score the victories in two of three heat races and sat on the pole position for the main event with Ross in second and Robert Schneider (Rpm RaceKarts/Margay) and Baker making up row two. Baker and Ross both got by Rhodes on lap one of the main and Baker never looked back. Rhodes finished second with Ross third and Schneider coming home fourth. 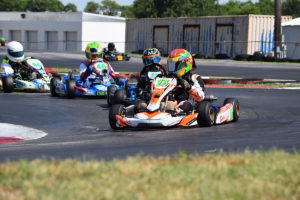 Briggs – World Formula Pro Heavy presented by Fast Auto Transport
The World Formula Pro Heavy class sponsored by Fast Auto Transport was a close battle all weekend with three drivers who all know how to win. BJ Hodge (Rpm RaceKarts/CRG) owner of Fast Auto Transport and sponsor of the class, took the pole position in qualifying. In the heats, Jean-Michel Gaston (Damz Inc /Alpha Kart Exos) dominated and started on the pole in the main event. Mark Cresswell (Trackside Karting Services/Comp Kart) and BJ Hodge (Rpm RaceKarts /CRG) chased Gaston all weekend. In the main event, BJ Hodge was able to take home the win with Gaston running a very close second and Cresswell in third.


Briggs LO206 Light presented by Margay Racing
The LO206 Senior Light Class sponsored by Margay Racing had very tough competition throughout the weekend, with the out-of-town and home town racers fighting for the top positions. TSRS saw several new series racers including Mike Jones and S1 Shifter Pilot Austin Wilkins from Dallas Karting Complex (DKC) come to compete in this highly competitive four-stroke class. The LO206 Light qualifying started off with Louisiana’s own Greg LaCoste (Coyote) taking the pole position with Riley Dickinson (Texas Karts/Intrepid) second, Austin Wilkins (TexasKarts) third and Shane Burkett (Coyote/Louisiana) in fourth. LaCoste showed he was capable of winning all weekend with two heat race wins. In the main Riley Dickinson would take his second race win of the series with Shane Burkett crossing the line in second. Mike Jones would end his day in third with Austin Wilkins and Brian VanCleve coming home fourth and fifth respectively. Shane Burkett was the most consistent all weekend never finishing less than fourth in any of the heats or main event. In the end Mike Jones indicated he was very pleased and surprised at the very high level of competition in the LO206 light class. We hope to see him and other DKC drivers come join the fun in the future, as we look to make this one of the biggest and best four-stroke series in the country and we have drivers that can compete at any level.

Briggs LO206 Heavy presented by Texas Karts
The LO206 Heavy Class sponsored by Texas Karts saw Dale Ross (Eagle Kart) dominate the field for the second race in a row. Ross took a perfect sweep in all heats and the final. NTK racer Tam Nguyen ran a perfect second on the weekend. HCKC racer Paul Gonzalez (Intrepid) ran a consistent third in all the heats but ended the weekend finishing fifth in the final. HOTKC racer Tommy Sutton (Arrow) chased Gonzalez all weekend and ended up taking the final third place position for the second race in a row. NTK’s own Bryan Luyster (Margay) closed the weekend in fourth and Brad Holly (CRG) struggled all weekend and ended up P6 after the final checkered flag.

Briggs LO206 Cadet presented by LiMi Makeup
The LO206 Cadet class sponsored by LiMi Makeup provided great driving by the young field. Race one winner Ragan Saville (Merlin) had a race on his hands all weekend as Louisiana’s Cameron Reed (Iconic Edge) was the kart to beat once the fun began. Reed won all three heats and main event for her first race of the year with TSRS. Jerry (Bubbie) Rhodes (Rpm RaceKarts /Margay) was Mr. Consistent with three third place heat finishes and a second place result in the main event. Austin Roy (Rpm RaceKarts /CRG) finished third in the final and never let his teammate Rhodes out of his sight all weekend. James Moss (Birel) showed some great driving skills in the rain for heat two and finished a strong fourth in the main. Regan Saville was the only driver all weekend that could challenge Reed and he pushed the limits trying to pass her. In the end he took home fifth, but this boy wants to win every time he is on the track and he leaves nothing on the table each time out. 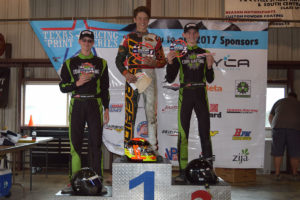 TaG Cadet presented by Wilson Fire Equipment
The TaG Cadet class sponsored by Wilson Fire Equipment was stacked with a solid 17-kart count. After the long qualifying session, it was local SodiKart driver Caiden Mitchell with a time of 40.349. Core karting Alex Stanfield put up a good flight just short of pole with a time of 40.389. Chase Gardner was third with 40.513 Aden Rudolph was a close fourth with a lap of 40.590. Heat one showed that Chase Gardner wasn’t going to let Caiden Mitchell steal the show as Gardner took the win. Caiden Mitchell got beat at the line by .041 with Alex Stanfield finishing solid third with fast time of the heat. Heat two had Mitchell back on top with Chase Gardner holding back a charging Stanfield and Aden Rudolph making his presence known with a great run to forth. Heat three was another great performance for young Gardner as he took the win. Ryan Shehan moved up around Mitchell for second and Mitchell would have to settle for third. Hailey Taylor had her best heat of the weekend in fourth. The final had a three kart train break away with Ryan Shehan leading over Mitchell and Gardner. Didn’t take long for the SodiKart to get around Shehan and take the round two victory. As the checkered flag flew it was, Mitchell, Gardner, Shehan, Stanfield and Cresswell rounding out the top-five.

TaG Junior presented by Trackside Karting Services
The TaG Junior Class sponsored by Trackside Karting Services showed strong racing all weekend with 13 kids vying for the top step. Local driver Kaden Gray (CRG/Core Karting) made use of track knowledge and landed himself a pole position with a time of 37.107. Adrian Cruz (Sodi/DKC) was so close with a fantastic time of 37.159. Enzo Scionti (Tony) was third with the time of 37.431. Heat one showed that Kaden Gray was on a mission winning heat one over Adrian Cruz and the 121 of Travis Wiley. Heat two had a new winner Jett Morton, who would drive on the slippery track to his first heat race win of the series. Kaden Gray held on for second and after missing qualifying and heat one, round one winner Ethan Arndt would come home third. Heat three was all Gray as he put the Core Karting CRG out front to a five-second victory. Arndt would arrive in second and Gunnar Bellehumeur finished third. The final showed it was the local driver who led flag to flag. Kaden Gray over Ethan Arndt and Travis Wiley would stand on the podium, Jett Morton was a solid fourth and Gunnar Bellehumeur was fifth.

TaG Light presented by CRG Nordam
TaG Light sponsored by CRG Nordam had a smaller field but still had some great racing. Alpha driver John Berry put down the fastest lap in qualifying with a 37.101. Miguel Mier was P2 with a close time of 37.164 and Doug Foxworth was third with a 37.742. It was an Alpha one-two in heat one, with Ryan Lewis over John Berry and Miguel Mier rounding out the three. Unfortunately, Ryan Lewis was a little light at the scales so the race winner in heat one was John Berry. Doug Foxworthy would move from fourth to third. Heat two was again the Alpha duo of Lewis and Berry and Miguel Mier was third on his SodiKart. Heat three showed how much speed the SodiKart had with Miguel taking down the Alpha drivers. John Berry and Doug Foxworth rounded out the top three. The final was all Ryan Lewis winning by an impressive 8.2 seconds over the SodiKart of Miguel Mier and John Berry rounded out the podium. 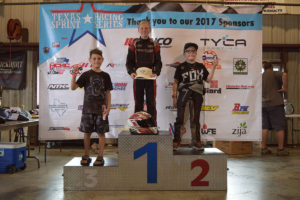 Race three for the Texas Sprint Racing Series will be held at the Hill Country Kart Club (HCKC) track in New Braunfels, Texas on the June 24-25 weekend. There is an expected attendance of 65-70 racers for the next round. Race four, and the final race of the season and championship, will be held at the newly completed SpeedSportz Racing Complex in New Caney, Texas, on September 30 and October 1.