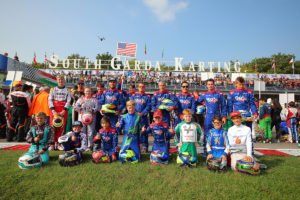 The 2019 Vortex ROK Cup Superfinal has now come and gone and entries from the United States showed why they are some of the best in the world. Claiming a pole position, heat race wins, three podium finishes and several results in the top-five in the international event, drivers from the ROK Cup USA program walked away from the weekend with experiences, knowledge and motivation as the future of the ROK Cup program shines brighter all over the world than it ever has before. With a staggering 419 drivers from 52 countries around the world competing and spectators lining the fences throughout the weekend, event registration went off without a hitch while the prize giving and post event party proved to be a blast for all.

ROK Shifter Vortex Trophy
First up on Sunday was the Shifter ROK Vortex Trophy race that featured four Team USA drivers including Victor Jimenez, Andre Martins, Cooper Becklin and Rod Clinard. With their heat race results not allowing them to transfer directly to the main event, these four drivers battled hard in the first wheel-to-wheel action of the day.

It was a short live raced for Jimenez however, as contact in the opening complex of corners damaged his Tony Kart. Unable to continue on, Jimenez was forced to watch from the sidelines as the rest of the field streamed by. Andre Martins rocketed his way off the line and quickly found his way inside the top-ten where he maintained pace for the entire 15 lap race finishing 7.151 behind the winner, Italian Andrea Tonoli. Birel’s Cooper Becklin mirrored Martins’ quantity of positions gained from start to finish as both drivers advanced forward four spots as the duo finished ninth and 11th on track respectively, but a penalty for Becklin moved him back to 16th. Rod Clinard and his CRG closed their 2019 ROK Cup Superfinal with a 20th place result. 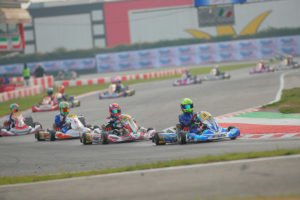 Junior ROK Bridgestone Trophy
The Junior ROK Bridgestone Trophy race saw two Team USA members battle as William Ferguson lined up in the sixth row while Santiago Biagi rolled off 25th. Looking to end their weekend on a high note, Ferguson ran the majority of the race in the top-15 until contact on the final circuit sent him down the running order. Crossing the stripe in 32nd, the end result was not indicative of his speed as the young American was poised for a solid finish. Biagi had an issue during the opening laps but soldiered on to finish 33rd.

Though consistent in his heat races claiming three finishes inside the top-20, Emmo Fittipaldi did not garner enough points to make it through to the Junior ROK Final or Bridgestone Trophy races. Finishing 13th, 19th and 15th in his first three heat races, the second-generation driver had a pair of finishes in heats three and four that ruined his chances of advancing.

Mini ROK Singha Trophy
Narrowly missing a transfer position to the main event, Enzo Deligny lined up on the front row of the Mini ROK Singha Trophy and instantly went backwards. Falling behind early due to the poor outside front row starting spot, Deligny closed the first lap in eighth but then went to work to move his way back forward. Scoring the fastest lap of the race, the young Tony Kart driver moved his way up to finish fifth.

While Deligny faltered on the start, Matias Orjuela took full advantage of the situation and leveled up to third from his sixth place starting position. Battling at the front of the field with some hungry Mini ROK drivers, Orjuela put a pair of drivers in the top-ten with a seventh place effort. The third Team USA driver had an unfortunate opening complex of corners and contact resulted in a broken tie rod and bent steering column for Xander Reed. Fast throughout the weekend, Reed was forced to cheer on his fellow countrymen as they battled in the top-ten. 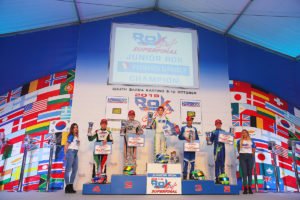 Not classified after the heat races were Casey Moyer, Caleb Gafrarar and Salvador Della Vecchia. The three Team USA drivers ran into some unlucky scenarios during the five-heat race flight format and would not advance.

Mini ROK Final
With two heat race wins to his credit, Vortex ROK Cup Superfinal pole position winner Kai Sorensen was forced to start the Mini ROK final from the fifth row as a penalty in one heat relegated him down the running order. Lining up ninth and showing his aggression and effort to make it to the front, the young American closed the opening lap in P3. In an aggressive race that saw the top-seven drivers battle wheel-to-wheel, Sorensen fell back to sixth before moving his way forward yet again. When the dust had finally settled, the multi-time 2019 champion crossed the stripe in the third position, but a push back bumper penalty relegated him down the running order to finish 21st. In the end, Sorensen showed the true strength or the American Mini ROK program and was a threat for the race win throughout the weekend.

Starting 21st on the grid, Miguel Costa found his way to the thick of the midfield battle. Advancing his way forward early in the race, Costa settled into a rhythm that saw his lap times only a few tenths off of the leaders. Pushing hard to make up as many positions as possible, Costa closed his event with a 16th place finish to rank as the highest Team USA entrant in the Mini ROK division.

Junior ROK Final
The 2017 Vortex Mini ROK Superfinal Champion Connor Zilisch found himself in a similar situation on Championship Saturday at South Garda Karting. Rolling off the grid in the un-favoring second position, the pre-race goal was to stay in the top-five and attack early in a patient but aggressive manner. Closing the first lap in the third position but falling back to sixth in the middle stages, the young American finished fifth, providing Team USA with their best result in the junior category. 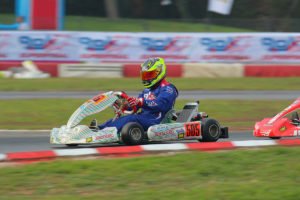 Though his speed all week saw him run inside the top-ten, Luca Mars was forced to start the Junior ROK Final from P19 in his quest for ROK Cup Superfinal glory. Taking advantage of the opening lap racing action, Mars advanced forward six positions to close lap one in 13th. Running laps faster than the leader and scoring the second fastest lap through the midway mark of the race, Mars was able to pick his way forward one more position to end his weekend in 12th.

Starting 24th on the grid, Nicola Zecchinato’s opening lap nearly mirrored that of Luca Mars as he was also able to advance forward a handful of positions that aided in his main event results. Closing his weekend with a 17th place finish, Zecchinato proved that he is one of the top drivers to compete from Team USA.

ROK Expert / Expert Plus Final
Team USA would have three drivers start in the top-six of the ROK Expert main event as Renato Jader-David led the way in third, followed closely by Derek Wang in fourth and Ariel Castro in sixth. Timothy Meyer and Yannick Rolland lined up 20th and 21st respectively to put five drivers in the 33-kart field. Jader-David maintained his position on the opening lap and advanced forward to second on lap two while Wang fell back to sixth. Castro was involved in a first lap scuffle that sent him down the running order to 24th and incurred a three second penalty in the process, while Rolland benefited from the melee to advance to 15th. Meyer moved to 19th by the end of lap three.

Meyer’s main event came to an end after only four laps as he would be classified in 31st while at the halfway point, Team USA was looking decent with four drivers in the top-20 and ran third, sixth, 14th and 20th.

Ariel Castro retired on lap twelve and would finish 30th while Rolland made it five laps further to lap 17 before coming to a stop on track. At the front of the field, it was Jader-David who made a move on the penultimate lap to put himself in position for the win but lost some momentum to the leader. Crossing the stripe .770 in arrears, the Florida Winter Tour Champion scored Team USA’s second podium of the weekend with a second place result. Losing touch with the leaders around the halfway mark, Wang pushed as hard as he could to close the gap. With lap times comparable to the winner, the Challenge of the Americas frontrunner crossed the stripe in seventh, putting another top-ten on the board for Team USA. 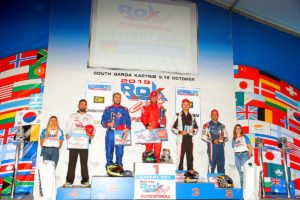 Super ROK Final
Courtesy of a strong set of heat race results, Jace Denmark-Gessel secured the fifth place starting spot in the Super ROK main event and was the sole Team USA member to compete in the class. Consistent throughout the heats and hoping to attack in the final, Denmark-Gessel’s race came to a close in turn three with contact while running in the fifth position.

Showing the strength of the American program and the caliber of the drivers, Denmark-Gessel held his own in the fastest non gearbox ROK division on the weekend, and he will be a threat for wins and podiums at ROK Cup events in the future.

Shifter ROK Final
The ROK Shifter main event saw three names that have become synonymous with gearbox racing in North America. AJ Myers led the trio in results through the heat races and started the main event from the outside of row two while Daniel Formal lined up 15th. Ron White, struggling for pace slightly throughout the week, squeaked his way into the main event starting 29th overall.

Myers, known for his incredible starts this past week, rocketed off the line from his P4 starting spot to take the lead by the time they entered turn three. Defending as much as possible, Myers fell back to third before the end of the first lap and settled into a rhythm. Ron White was involved in an opening corner incident and taken out of the race while Formal had to take evasive action to miss the turn one pile up. Losing time to the lead trio early, Myers fell back to fourth, nearly 1.5 seconds behind the leader but was able to keep pace and hold his own. Pushing hard to break away from fifth, the CRG driver eventually caught the leaders with two laps remaining as they became engaged in a battle of their own.

Aiming to have the title of ROK Cup Superfinal Champion, Myers took advantage of some late race action to advance forward to the second step of the podium, a scant .202 behind the race winner bringing Team USA their third podium result of the day. Daniel Formal leveled up from his 15th place starting position to finish 11th after a hectic opening lap. 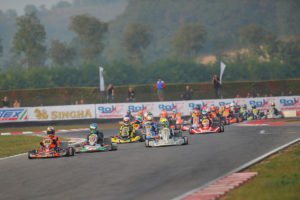 Senior ROK Final
Emma Delattre, the OMP Trophy winner from 2018, showed improvement from year to year qualifying directly into the Senior ROK Final and beginning her quest for victory from inside row nine. Falling back to 23rd on the opening laps, the female driver was able to get comfortable with her Exprit chassis and made moves to advance forward from 23rd to 19th in the first seven laps of the event. In a talent filled Senior ROK field, Delattre was the only American in the main event and raced proud for her country en route to a 23rd place finish.

With the 2019 ROK Cup Superfinal now in the record books, the focus shifts to North America for the second annual ROK Cup USA ROK the RIO event at the Rio All-Suites Hotel and Casino in Las Vegas, Nevada. With pre-entry numbers exceeding the inaugural event entry total from 2018, the biggest ROK Cup race in North America will take place October 30th to November 2nd with cash and prizes on the line.