With the first quarter of the karting season now closed, Team Koene USA continues to show why they are one karting’s powerhouse programs. Competing at both the ROK Cup USA and Rotax MAX Challenge portions of the 2016 Sofina Foods Florida Winter Tour, the team secured multiple podium results, race wins as well as a vice-championship in Rotax Senior and the championship title and accompanying ticket to join Team USA at the Rotax MAX Challenge Grand Finals in Rotax Junior.

“It was a great series for us,” explained Koene USA Team Principal Mike Maurini. “We had some new as well as some returning drivers for 2016 and had goals for them all. With improvement made by many and race wins and podiums by others, the 2016 Florida Winter Tour was a very strong program for us.”

This past Sunday, Team Koene USA would continue to add to their resume of results as Michael d’Orlando would claim the Rotax Junior championship and ticket to join Team USA at the 2016 Rotax MAX Challenge Grand Finals. Zach Holden, who had never driven a Rotax powered engine until the January round at Homestead, had great consistency and was able to stand on the championship podium with a vice-championship to his name. d’Orlando was also able to secure the vice-championship in the ROK Junior class a week prior.

While the above mentioned drivers were on the championship podium, several others showed speed and managed to secure race day podiums throughout the Florida Winter Tour. Trenton Estep secured his first career Rotax Senior win taking the top step of the podium at Ocala Gran Prix while Michael d’Orlando claimed the ROK Junior victory at Homestead Karting back in January. Younger brother Nicholas d’Orlando was able to grab his first career Rotax Junior pole position and podium result with a second place effort at February’s round while Roman DeAngelis and Zach Holden were both on the ROK Senior podium back in January.

Florida Winter Tour and Vortex Micro ROK newcomer Ryker Mattes showed constant improvement throughout the series with the final round at Palm Beach Karting proving to be his best of the series. Nathan Ratton and Payton Durrant showed pace in Rotax Junior and would often have times comparable to the front half of the field. Increasing their aggressiveness throughout the Florida Winter Tour, both drivers had their best finishes of the season at the final round as well. Durrant will now shift his focus to the final round of the Challenge of the Americas were he looks to finish strong in a few weeks’ time.

Haopeng Zhang and Yan Liang planned to compete at the Florida Winter Tour back in December and saw just the speed that was needed to compete at the first round. After taking some driver coaching lessons and extra practice days, the duo began to work their way up the order. Committed to improving, both drivers studied video and data as well as worked with all the members of Team Koene USA to consistently improve each and every outing. 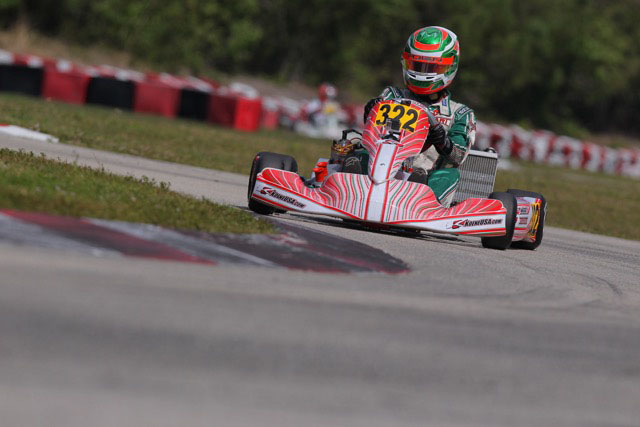 Rotax Junior driver Zoey Edenholm used the Florida Winter Tour to race against competitive and larger fields in the Rotax market. Honing her skills for an assault on the Superkarts! USA Pro Tour and US Open programs, Edenholm will continue to march her way up the result order with the Rotax powerplant. Already a race winner in the SKUSA Pro Kart Challenge program and double podium winner at the Challenge of the Americas, Edenholm is looking for that elusive national level victory that is just around the corner.

With the Florida Winter Tour now complete, Team Koene USA will begin to focus on two major national karting series in the Superkarts! USA (SKUSA) Pro Tour and the US Open. Stay tuned for driver lineups and news regarding the Indianapolis based squad.

Maurini continued, “I would like to personally thank all of our team members, mechanics, parents, families and supporters for all of their hard work and efforts. Without this talented group of people that we have, none of this would be possible. Thank you again!”