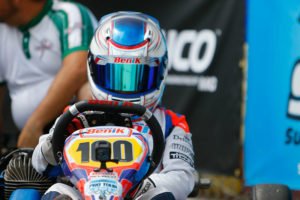 Set to compete in the biggest event in North American karting, Team BENIK will bring fifteen drivers to the annual Superkarts! USA (SKUSA) SuperNationals at the RIO All-Suites Hotel and Casino in Las Vegas, Nevada. Taking place November 14-18 and with drivers from around the world, BENIK will enter drivers in Micro Swift, Mini Swift, KA100 Junior, and X30 Junior.

“Excited to head back to Vegas for the SuperNationals, we have great drivers and personnel to help get them to the top step of the podium,” explained Nick Mitchell. “We have competitors scattered throughout the Micro and Mini ranks as well as some very stout Juniors. While the SuperNats is the unofficial end to the karting season, it is our intention to use this event to springboard into a winter testing program and the 2019 racing season.”

Michael Costello and Jimmie Lockhart will return with Team BENIK for their first time in Las Vegas. Looking to build upon and improve their 2018 results, the duo will be part of a large Mini Swift contingent. Brand Carr will be back in Sin City after his sixth-place run only a week ago. Vinicius Tessaro will make his Team BENIK debut next weekend but is returning to the SuperNationals after claiming the 2016 SuperNats victory in Micro Swift and the 2018 Brazilian National Championship in Mini Swift.

One driver from New Zealand and two from Australia will make their return to Vegas with Team BENIK. New Zealander Jay Urwin and Australian Kristian Janev will compete in IAME Micro Swift while Aussie Ben Taylor will do battle in the KA100 Junior category.

In the X30 Junior field, multi-time champion and former SKUSA SuperNationals winner Tyler Gonzalez will fly the BENIK colors while Matthew Marrocco will make the trip from Spain. Gonzalez, who is also competing in the Global Mazda MX-5 Cup in 2019, will look to add another SuperNationals win to his resume. Marrocco has been competing in Spain and Italy for the past few seasons and provides Team BENIK with a powerful one-two punch in the Junior ranks.

As they have for the past few years, Fusion Motorsports will bring a handful of drivers and utilize Team BENIK as their home for the week. Freddie Slater, the Vice-Champion of the X30 World Finals in Le Mans, William McIntyre the Vice British Champion and Vinnie Philips, the 2017 SuperNationals Micro Swift Champion will all be fighting for the win in Mini Swift this year.

Fusion Motorsport’s Alfie Slater and Maison Rudman will battle in the Micro Swift ranks while Ian Aguilera will throw his hat in the mix in X30 Junior.

Mitchell continued, “Though we have two separate entities competing under one tent, we are one team and will do everything possible to better our teammates, the overall team and aim for the podium in Las Vegas.”

For more information on BENIK, please contact Nick Mitchell via e-mail to Info@Benik-Kart.com or by phone at 754.206.4870.