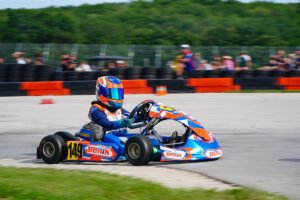 Continuing where they left off their last United States Pro Kart Series (USPKS) event, Team Benik was once again back at the pointy end of the field. With five drivers making the trip north to the CTech Manufacturing Motorplex at Road America, the Florida based program earned a pole position, podium results and multiple top-ten finishes to start the second half of the karting season.

“It has been a while since we were at a national event as there was a little break in the schedule, but we are happy to be back,” explained Nick Mitchell. “To leave the USPKS program with podiums and the finishes we did is great considering the level of competition. We always want to win, and we will be back to close the series strong later this year as we make that the goal.”

It was the Mini Swift duo of Enzo Vidmontiene and Asher Ochstein who led Team Benik on the results sheets on Saturday with Vidmontiene grabbing the fourth position, and Ochstein finishing on his bumper in fifth. With the Mini Swift field one of the most competitive in the USPKS program, a pair of top-five results are great, but the goal is to win. 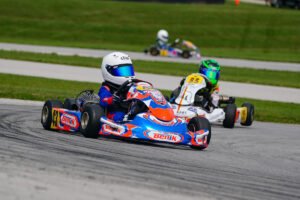 Troy Ferguson and Royce Vega saw action in the Micro Swift ranks, and each earned top-15 results. With both drivers showing consistent and steady progress, Ferguson got the best of his Team Benik teammate finishing 13th as Vega was classified in 15th. Michael Costello battled hard in the X30 Pro Junior class showing top-ten pace. After a disappointing prefinal that saw him outside the top-20, the Team Benik driver drove back forward to cross the stripe in 14th.

Returning to the track Sunday for round six, Vidmontiene would lead the charge in Mini Swift with the pole position in qualifying before finishing second in the prefinal with the fastest lap of the race. Looking to maintain his position on the top of the podium in the main event, the multi-time race winner in 2021 finished third to add to his championship points total. Ochstein steadily improved throughout the day, driving from 13th to 12th in the prefinal and then had a spirited drive to fourth in the main event to put a pair of Team Benik drivers in the top-five. 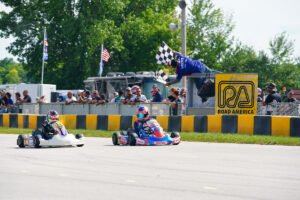 Michael Costello improved from his 14th place result on Saturday to earn a tenth-place finish in the round six final, but he had the drive of the day in the X30 Pro Junior prefinal gaining nine positions to finish ninth and earn the honor for the most positions gained. Troy Ferguson and Royce Vega continued to battle just inside the top-15 on Sunday with Ferguson scoring a 15th place result while Vega fell from 18th to 28th in the main event but showed speed and improvement from event to event.