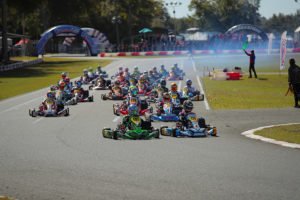 Back to Ocala Gran Prix for the second round of the ROK Cup USA Florida Winter Tour, TB Kart USA was able to put two drivers on the podium in the ultra-competitive ROK Shifter Master division. Leading the way on track and standing on the podium post event was Rene Martinelli in second and Peter Licciardi in third.

Working through the heat races and prefinals, the ROK Shifter Master quartet of Martinelli, Licciardi, Chris Gannon and Farshad Bagheri claimed 11 of a possible 20 top-five finishes, solidifying their front of the field presence. Sunday saw a continuation of the TB Kart name at the front of the field as two drivers completed their weekends on the podium while three scored top-ten results after the final checkered flag.

“With four drivers in the field, all four were able to have finishing results inside the top-five on occasion,” explained Farshad Bagheri. “This is a testament of how good our equipment is. Different driving styles, different skillsets and different approaches but the speed was present amongst all four. Unfortunately, we all could have been in the top-five if it wasn’t for some poor luck on Sunday.”

Austin Garrison put his TB Kart USA entry in the third position after qualifying but due to some wet weather in the area and the enforcement of the sealed grid rule, missed the cutoff time for the first wheel-to-wheel action of the weekend. Returning Saturday, Garrison went second and second in his heat races before a ninth place finish in the prefinal after an opening lap blunder that he was unable to overcome. In a longer but fast main event on Sunday, Garrison worked his way forward two more positions to finish seventh. Fellow ROK Shifter driver Zachary Hollingshead looked to have the speed on Friday after qualifying fifth but was also a victim to the heat one sealed grid rule and was forced to watch from the sidelines. Progressing through the weekend, Hollingshead ended with a 13th place finish. He and Garrison will look to end their Florida Winter Tour campaigns strong at Tropicana Field in St. Pete in a few weeks’ time.

Two additional top-ten results came out of the 206 Senior class with TB Kart USA drivers Andrew Burley and Jed Perkins. Hovering just inside the top-ten throughout qualifying and the three heat races, Burley overcame an 18th place result in the prefinal to end his weekend in P8. Perkins, who had the strongest results of the TB Kart contingent through the heats, finished tenth while Jorge Ruiz was classified 20th after finishing ninth in Saturday’s prefinal. 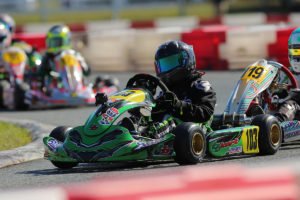 Running against some of the top drivers in North America, ROK Senior pilot Collin Warren held his own inside the top-ten. Qualifying 15th, Warren had a pair of eighth place heat race results before a disappointing prefinal that saw him classified in 34th. Never one to give up, Warren and his TB Kart gained 17 positions in Sunday’s main event going from 34th to 17th.

A pair of TB Kart USA Mini ROK drivers would enter their first Florida Winter Tour event to gain experience in one of the toughest classes in the country. Turning laps and closing the gap to the leader with each passing on track session, Steve Miller had a weekend best 14th place result in heat one before finishing 17th in the main event. Anastasia Markovic steadily improved throughout the event weekend to turn her 18th place qualifying run into a 13th place result on Sunday.

Bagheri continued, “All in all it was a good weekend and I think we made it known that the TB Kart brand is a force in 2020. We had a ton of interest in our products over the weekend and continue to gain market share. The goal for 2020 is to push even harder and see what we can do at round three of the Florida Winter Tour in St. Petersburg.”

For more information on TB Kart USA, how to become a dealer or their national level race team, please contact Farshad Bagheri at 727.204.7633 or via email to FBagheri@TBKartUSA.com. TB Kart USA can also be reached online at www.TBKartUSA.com or by searching TB Kart USA on the Facebook, Instagram and Twitter social media platforms.