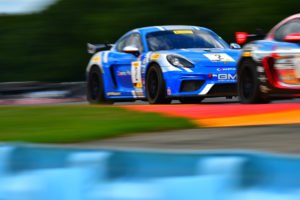 It was a successful weekend at Watkins Glen International Raceway for Floridian Jason Bell. Competing in both the GT4 America Sprint and SprintX divisions, Bell secured four top-ten finishes behind the wheel of his GMG Racing prepared Porsche GT4 machines.

Driving on his own in the GT4 America Sprint division, Bell co-drove with Andrew Davis in SprintX where the duo claimed a pair of seventh place finishes. In the double qualifying session format, Bell secured the sixth fastest time on Saturday morning while Davis went second quick in the second of two sessions. In the first wheel-to-wheel action of the weekend, the GMG Racing duo finished seventh in class and repeated their performance again on Sunday. Looking good for the race win early on in the race, a punctured tire forced Bell to the pits early hindering any chance at the race win.

“It is always great driving with Andrew. He is a great driver and has a great understanding of the car,” explained Bell. “Our driving styles are very similar, so it makes car setup easy, and we just need to check the boxes to ensure a successful weekend.”

In the GT4 America side of the program, Bell had a better than average weekend. After qualifying sixth in class, 13th overall, the Porsche driver was able to add another top-ten finish with a ninth in race one after having to battle back from running outside the top-ten. With the second of two races taking place on Sunday morning, Bell advanced forward to finish seventh in class and garner his fourth top-ten result on the weekend.

Bell continued, “Watkins Glen is one of the tracks that I look forward to all season. We always seem to perform very well here, and this weekend was another example of the consistent program that we have become.”

With a few weeks off, Jason Bell’s next on rack action will take place at the famed Road America facility in Elkhart Lake, Wisconsin. With the event running over September 20-22, Bell will once again see action in both GT4 America Sprint and SprintX.